For the farmer hedgehog from the Village, see Hedge Farmer.

The 'Edge Farmer is a minor character in Specter of Torment. He hangs around with the Order of No Quarter to display his edginess and claims to be a judge of character for this particular trait. He is brothers with Hedge Farmer, Hedge Pupil,[1] and Ledge Farmer.

The 'Edge Farmer is a humanoid hedgehog that wears a black jacket and sunglasses, and carries around a skateboard and a yo-yo.

In Specter of Torment, 'Edge Farmer can be found in the Tower of Fate, by the skating room in the top-left side of the hub. As an edgy character himself, 'Edge Farmer is skeptical about Specter Knight's "edginess". He can be impress by skating with the Rail Mail on the ground while in front of him, or by performing the "Cold Shoulder". He then gives Specter Knight 150 gold for each action once when talked to.

'Edge Farmer reappears during the endgame aboard the Flying Machine. He watches the fleet taking flight and is particularly impressed by the Airship Enthusiast who throws him a rose.

When talked to normally:

Impressed by the Rail Mail:

"'Edge Farmer: Oi! Yer cuttin' edge, Oi reckon! Never been an 'edgier bloke, to my knowl-edge! It's all... rather edge-ucational!"

Impressed by the Cold Shoulder: 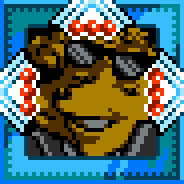 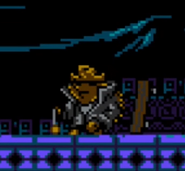 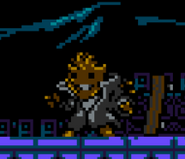 The 'Edge Farmer impressed.
Add a photo to this gallery

Retrieved from "https://shovelknight.fandom.com/wiki/%27Edge_Farmer?oldid=36896"
Community content is available under CC-BY-SA unless otherwise noted.