Adventurers are minor characters in Shovel Knight: Treasure Trove. They usually wander the Village and Armor Outpost but can also be found in other stages.

Adventurers appear as bipedal male horses wearing clothing, although a single human one appears in the StreetPass Arena.

In Shovel of Hope, Adventurers can be seen around the Village and Armor Outpost. One can be found at the Knuckler's Quarry, hinting on using the Dust Knuckles to clear the stage. Another can be found at the StreetPass Arena in the Nintendo 3DS version along with a Villager also titled Adventurer. The latter gives Shovel Knight's overall scores at the arena. The same horse adventurer can be found at the catapult in the third quadrant of the Valley in a game version with either Kratos or the Battletoads, and hints at the location of the Mysterious Map inside the Hall of Champions.

In the ending, two adventurers can be seen accompanying Mole Knight in his expeditions to find treasures in the Lost City.

In Plague of Shadows, Adventurers are only seen around the Village, but Plague Knight scares them away and cannot talk to them. One can also be seen aboard the Aerial Anvil, upon leaving the Armor Outpost invaded by Plague Knight and his minions. Percy, another horse, is a major character.

Although not appearing in the story itself, a horse Adventurer can be found at the end of the Specter of Torment challenge Beeto's Big Break, hinting at how to solve this tricky challenge.

A blue clothed, brown colored Adventurer walking in the Village:

"Adventurer: That odd fellow, Chester, is selling Relics! I'm so tempted to buy some!"

"Adventurer: If you are getting stressed out, try fishing! You never know what you'll catch!"

"Adventurer: Sigh, there's no way to punch through. I wish I could just dash through all this dirt!"

"Adventurer: Another knight with a shovel? I just saw one of you guys earlier, but he was scary looking!"

A blue clothed, brown colored Adventurer at the StreetPass Arena:

"Adventurer: After years of adventuring...I finally arrived at the StreetPass Arena. Once I rest mah hoofs, I'm going to record my secret battle technique."

"Adventurer: The Passmaster is a Super Skeleton, undefeated in the StreetPass Arena! Now let's see how you've fared... Your wins: [x] Your losses: [x] Your draws: [x] Keep training, and one day you might lie up to the glory of the Super Skeleton!"

A blue clothed, brown colored Adventurer standing by the catapult:

"Adventurer: Hey! I heard that there is a super-hidden double secret in the Hall of Champions... Where could it be?"

"Adventurer: You found the Hall of Champions secret already?! Back in my hayday, I'd have found it first!"

A blue clothed, brown colored Adventurer at the end of the challenge Beeto's Big Break.

"Adventurer: Curse these foul pits! If only I could juggle a enemy, I could get right up there!!"

An orange clothed, light grey colored Adventurer walking in the House of Joustus:

"Adventurer: Don't chomp your bridle if the enemy captures a gem. Just push 'em off again!"

A blue clothed, brown colored Adventurer at the Cavern of Joustus:

"Adventurer: I heard someone bested King Pridemoor! I wish I could meet whoever defeated him.."
"King Knight: You heard about that?
Well actually,
it was none other than.."
"Adventurer: .. So I could
clock him
and steal his Joustus deck! Then I could become King of Cards myself. Anyway, you were saying, friend?"
"King Knight:
Uhhhh!
It was none other than...
someone else!
And I'm sure
he's
not dashing as I am." 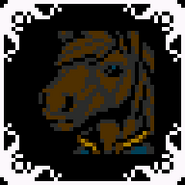 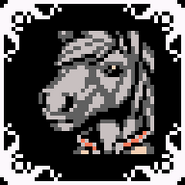 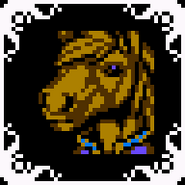 The Adventurer in his default color palette.

The human Adventurer at the StreetPass Arena.
Add a photo to this gallery
Retrieved from "https://shovelknight.fandom.com/wiki/Adventurer?oldid=36584"
Community content is available under CC-BY-SA unless otherwise noted.