Armorer of the Aerial Anvil

Cavern of Joustus (King of Cards)

Armorer (called Greyson in the artbook) is a minor character in Shovel of Hope. He forges armors for knights at the Armor Outpost.

The Armorer is gruff, sporting a rough haircut and beard and muscular arms. He wears a green shirt, trousers and gloves and a brown apron. He usually stands on a stool to compensate the short lengths of his legs compared to his arms.

In Shovel of Hope, the Armorer can be found in the Aerial Anvil at the Armor Outpost. He sells different suits of armors which Shovel Knight can purchase. He also offers the knight to hold on any of his purchases, so he can change them here. In New Game Plus, the Goatarmorer also offers this service.

He appears in the ending, working with Tinker Knight and the Shovel Smith in the Clockwork Tower to make toys for children.

"Armorer: This is the Aerial Anvil! Need an armor upgrade? If you need something forged, I'm your fella! Har har!"

When acquired the Grave Digger's Shovel:

"Armorer: Need something forged? Har har! ...a Grave Digger's Shovel?! Where'd ya come across
that
relic? Maybe I can temper that tool a bit.. hand her here, fella."

[The Armorer forge the armor]

"Armorer: Well, good news and bad news, boyo. The Shovel? She feel to pieces. The pieces? Smelted it into some fine
armor!
The Armor? I call it... the Armor of Chaos! Y' see, the only thing I forge better than armor... is
names!
Har har!"

At the Cavern of Joustus:

"Armorer: Aye, we've built the great gate! The hinges took ages to forge, but our client paid a kingly sum!"

"Shovel Smith: Get this, mate. He claimed he was a Forest God. Fishier'n a room full o' Troupples, if y'ask me."

"Armorer:
A ha hah!
A whale of a tale! Fancy a round, stranger?"

"Shovel Smith: And mate? If ya ever meet a bloke claimin' to be an acolyte... Do yerself a favor- take the job!" 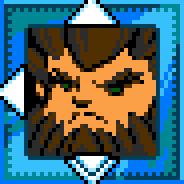 The Armorer at his shop.
Add a photo to this gallery
Retrieved from "https://shovelknight.fandom.com/wiki/Armorer?oldid=36093"
Community content is available under CC-BY-SA unless otherwise noted.