Shovel of Hope
Plague of Shadows
King of Cards

The Bard, or the Card Bard in the King of Cards demo, is a recurring character in Shovel Knight: Treasure Trove, usually found in the Village.

The Bard wears an orange overshirt with lace in the front and a brown cape in the back. His hat is a lighter orange with brown stitches on the rim, and holds yellow feathers. His sleeves are the same color yellow. He wears brownish leggings with a pointed toe, which is a traditional bard or jester trait. He plays a lute.

For some odd reason, the Bard wears a knight helmet.

In Shovel of Hope, the Bard can be found playing a lute near the Village's fountain. He sets Shovel Knight on a quest to recover his lost 46 Music Sheets, spread around the Valley. He rewards Shovel Knight 500 gold for each Music Sheet recovered. He also gladly details who requested each musical score and how he ended up creating them. Shovel Knight is then able to listen to the song whenever wanted.

He reappears in the ending with the rest of the Village, witnessing the fall of the Tower of Fate.

The Bard can be found at his usual spot in the Village in Plague of Shadows. Plague Knight cannot talk to him since he is barred from entry.

He is seen again in the ending, rejoicing with the rest of the Village at the destruction of the Tower of Fate.

In King of Cards, the Bard can be first met alongside Cooper in the House of Joustus. He can then be found on the Glidewing, where he awards King Knight with 900 gold and a song for every 10 Merit Medals. King Knight will be rewarded without having to give his Merit Medals to the Bard.

During the ending, it is revealed that the Bard lost his Music Sheets by dropping them during the Glidewing's destruction. Later, he is seen running after a Music Sheet outside the Homestead.

"Bard: Hail, traveler! I am but a simple bard, but I have a big problem... I've lost all my Music Sheets! My entire repertoire lays scattered across the land! If you ever find a Music Sheet, return it to me, and I shall reward you... handsomely!"

When bringing a single Sheet:

"Bard:
Oooohhhh!
You have a Music Sheet! Please accept 500 gold as a reward!"

When bringing two Sheets or more:

When giving the Bard a Music Sheet:

"Bard: Hail, Shovel Knight! Hero of music! What can the humble Bard do for you today?"

Choosing to play a song:

When giving him the last Music Sheet:

"Bard:
Unbelievable!
You've recovered every single opus in my oeuvre! A chromed-out curator! A heroic historian! You may have saved the village, but your real contribution... is to the fine arts!
Bravissimo!!
"

Speaking to him for the first time after beating either the Battletoads or Kratos:

"Bard: Hey Shovel Knight! I just received a book of mysterious songs from a faraway brand! I mean, land! Anyway, I've added them to the song list! So..."

"Bard: King Knight! You dazzle me with your gleam. A moment, if I may?"
"King Knight: Why, I do feel rather
regal
today! What troubles you, Bard?"
"Bard: Merit Medals. You see, I've realized that those brave enough to find them have... most interesting tales to tell. Most interesting indeed. Perhaps I could take a peek at your majestic collection, to inspire a melody?"

When enough Merit Medals are collected

"Bard: [x] Merit Medals! You're quickly becoming a bard in your own right. It's not much, but I've saved [x] gold to mark the occasion. Would you accept it?"

"Bard: I've another form of patronage, sire. Please, allow me to regale you with a verse you've inspired! Ahem.."

When 10 Merit Medals are collected:

"Bard: As he trod through the grass, o'er the hills of the plains, the king's cleanest trousers grew soiled with stains. Aboard from his castle, aloft in the sky... He traded his kingdom from a flagon of lye."

When more Merit Medals are needed

"Bard: King Knight! Ahoy! Avast! Bonjour! Any new Merit Medals? Looks like [x] total medals. Each one a song, a poem, a dream. Before you know it, you'll have [x]. Marvelous!"

"Bard:
Ahhhhhhh!
We're under attack!
"
"Cooper:
This is serious!
I know our foe all too well. The ship's on lockdown until we're rid of the enemy! Take out the intruders! I'll try to steer us out of this mess!"

"Bard:
It's curtains for me!!
I should have stayed home playing the same boring songs.
Help!!
"

"King Knight: King.... of Cards!? Mr. Bard! I must become the King of Cards!! This hunk of iron says you can help me!"
"Bard: Maybe I can! See I'm a simple bard, but I must move on as my songs have grown stale. Call me ... The Card Bard!"
"Card Bard: The Card Board behind me shows the local card competitors. Defeat them and you'll soon be king! Would you like to see the Card Board?"

"Card Bard: Matron Molly, quite nearby! My goodness, she is affectionate!"

"Card Bard: He's one of the fanciest players I've seen!"

"Card Bard: Defeat the other Card Board competitors to find this hungry fella!"

After beating both Molly and Leo:

"Card Bard: Wow, you beat all the challengers! No" 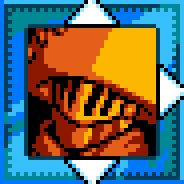 The Bard after dropping his Music Sheets.
Add a photo to this gallery

Retrieved from "https://shovelknight.fandom.com/wiki/Bard?oldid=36899"
Community content is available under CC-BY-SA unless otherwise noted.