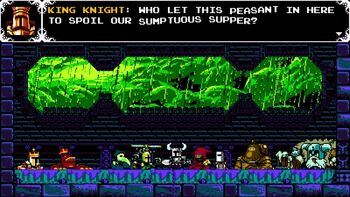 The Battle Royale is the boss battle for Tower of Fate: Ascent in both Shovel of Hope and Plague of Shadows. It is a showdown with all the knights of the Order of No Quarter fought in a randomized order - however, Polar Knight will always be fought in the first half. Between each fight, the challenger is given a platter with a turkey in it (and a large jar is also included every other fight).

For the most part, the boss battles are replicas of the earlier fights with the bosses: for example, Specter Knight makes two platforms appear and Treasure Knight fills the stage with water. There are, however, a few subtle differences in some of the fights: Plague Knight doesn't have the special destructible blocks beneath him, which makes the arena more predictable, while Propeller Knight doesn't have the small pits on either side of the stage and his airship can now only call down the small bomb volley, not the large cannonballs that destroy the stage.

This battle is made more difficult in New Game Plus by replacing every other turkey with a bomb. While the bomb can be used to damage the bosses, this halves the amount of healing available.

Once the battle is over, each knight will comically remain suspended, in order of defeat, at the edge of the stage, forming a human chain.

In Shovel of Hope, Shovel Knight plummets into the dining hall, accidentally interrupting the Order's meal. Still furious of their previous defeat, the knights decide to attack him. Once they are all defeated, Shovel Knight is given the choice to leave the stage immediately, or take his time to rescue them, providing additional dialogue by doing so.

In Plague of Shadows, the Battle Royale takes place under different circumstances, as this time it is Plague Knight who interrupts the Order, shortly followed by Shovel Knight, who plummets into the room knocking himself seemingly unconscious. Taken aback by his appearance but undeterred by it, the other knights of the Order still decide to attack Plague Knight in retaliation for his betrayal and previous assaults. As such, the first seven boss fights still normally follow, only for Shovel Knight to fully wake up and challenge Plague Knight as the eighth fight. After Plague Knight's apparent victory, Shovel Knight knocks him out from behind, ending the battle in a familiar way. Shovel Knight will then leave the dining hall, remaining deaf to the pleads for help of the Order and leaving Plague Knight to escape on his own.

According to Yacht Club Games, the reason why the exact events of the Battle Royale differ between the two campaigns boils down to a matter of perspective, as both stories are told from Shovel Knight or Plague Knight's point of view, and neither of them are totally reliable narrators.

"King Knight: Who let this PEASANT in here to spoil our SUMPTUOUS SUPPER?"

"Specter Knight: Hardly a surprise that you've yet again set foot where you don't belong..."

"Mole Knight: You're in deep now! We want a rematch!"

"Tinker Knight: My new plans have no flaws! You can't win this time!"

"Propeller Knight: A battle royale, then? MARVELOUS! Who will go first?"

"King Knight: Give us a hand, Shovel Knight! You wouldn't leave us to hang here, would you?"

Each knight after being helped:

"Treasure Knight: No amount of wealth is worth the heartache that awaits you. Good luck, doomed hero."
"Mole Knight: I have to hand it to you, you have superior digging technique. We should share notes."
"King Knight: My castle... my luxury... my fiefdoms! My... CHANDELIERS! Curse you, Shovel Knight!"

(If the player is wearing the Ornate Plate)

"King Knight: My castle... my luxury... my fiefdoms! My... CHANDELIERS! Curse you, Shovel Knight! ...Although, I must say, your armor is resplendent! I can see you've picked up on my style!"
"Specter Knight: My defeat is of no concern. The Enchantress cannot be stopped by any mere mortal."
"Plague Knight: I may not have your strength, HEE HEE, but I am still far more clever, so watch out! HEE HEE HEE!"
"Propeller Knight: Ahhh, how INVIGORATING! How UPLIFTING! If all your quests are this much fun, I should go with you!"
"Tinker Knight: There are substantial inadequacies in my hydraulic actuators. Considerable iteration is warranted!"
"Polar Knight: I meant what I said. You should still join us."

"Propeller Knight: Hoh! Look who's shown up on our... LITTLE SOIREE!"

"Treasure Knight: You're late on your membership dues, alchemist... and now the time has come for you to remit payment."

After Shovel Knight falls in:

"King Knight: SHOVEL KNIGHT?! You led him in here too? What madness is this?"

"Mole Knight: We'll deal with him soon. But first, I want to know why Plague Knight is showing his mask around here."

"King Knight: Yes! Yes! You've stolen all of my essence, maniac! All I have left is my wits! "

"Specter Knight: ... unlike wits, King Knight, you actually have some essence. It's merely weakened."

"Tinker Knight: We were strong as a team, but you just care for you! For shame!"

"Plague Knight: Haha! Might makes right, isn't that the Order's motto? I just took some initiative."

"Mole Knight: We'll never stand for this. You're gonna pay for what you've done, Plague Knight."

"King Knight: Give us a hand, Shovel Knight! You wouldn't leave us to hang here, would you?"

Retrieved from "https://shovelknight.fandom.com/wiki/Battle_Royale?oldid=28088"
Community content is available under CC-BY-SA unless otherwise noted.