Shovel of Hope (Xbox One and Computer Versions)

To the Turbo Tunnel

The Battletoads are a group comprised of Rash, Zitz and Pimple, they were originally exclusive to the Xbox One version of Shovel Knight: Treasure Trove, but were later added to the Windows 10 version and reached other computer versions in October 2017.[1] They can be found in the Mysterious Area. There the player can have a "sparring match" with each one of the Toads emulating the gameplay of the original Battletoads game. Upon victory the Toads will reward Shovel Knight with 2000 gold and the exclusive Toad Gear armor. The Battletoads encounter is only available in the Shovel of Hope campaign.

The whole level is divided in three phases, during which each Battletoad has to be defeated as an individual boss, and in different ways.

Zitz in the Wookie HoleEdit

Zitz appears during the first and third part of the rappelling phase. He has two types of attacks: frontal assault by approaching and punching Shovel Knight, and wrecking ball by launching himself from a wall. The latter can be easily avoided as Zitz briefly flashes as a wrecking ball before launching himself. He can be attacked by either swinging the Shovel Blade at him (1 health point) or by using the wrecking ball attack (2 health points). The special attack can be used by sticking to a wall and using the attack key. Zitz has 10 hit points in the first part and 20 in the second. Propeller Rats, Hover Meanies and bubbles also appear during the third part.

Pimple in the Turbo TunnelEdit

Like Zitz, Pimple appears during the first and third part of his obstacle race. He attacks Shovel knight by hitting him with his fist or bumping into him. The best way to deal with Pimple is to always move behind his hoverbike and hit him with the Shovel Blade, even when he jumps. He has only 10 hit points in his first appearance but 20 in the second, with additional obstacles.

Rash, the last Battletoad, is a tough fighter, with 20 hit points and great mobility moves. He runs back and forth across the screen and performs high jumps, making him difficult to hit. When he stops moving, he hits forward with his fist, which then increases ridiculously in size but offers a platform to Shovel Drop on. He can also dash through and is invincible when doing so. When jumping, he can also drops vertically to bury Shovel Knight in the ground, then send him flying with a kick.

The key to defeating Rash is to stay in movement and keep Shovel Dropping over his head. Relic attacks have few chances to work as Rash can dash through them.

"Rash: Hey, Pimple, I thought we were just goin' out for a burger and flies! Where'd that crazy space warp take us?"

"Zitz: Whoa, Rash, get a load of that shovel dude!"

"Pimple: Wait a minute, Zitz, is this guy talkin' about the Dark Queen, bros?! Lemme at her!!"

"Shovel Knight: Hm, I suppose one might think of her as a Dark Queen of sorts..."

"Rash: Well, lemme tell ya, we know a thing or two about fighting Dark Queens... And no offense, tadpole, but you look like you could use some help! How about we give you some training, Battletoads style?"

"Pimple: Oh, well look at this tough guy! Fine! We'll be stickin' around, come back when you wanna TOAD it up!"

Upon defeating the 'Toads:

"Pimple: Well, all this turbo training was draining. We oughta bug out and find some grub! Care to join us, shovel guy?"

"Zitz: Your loss! Oh hey, meet us back at camp, though. We wanna give you a little token of Toad gratitude!"

Zitz, back at the camp:

"Zitz: Most righteous shovel bro, we hereby name you an HONORARY TOAD! To aid you in your battle against your own Dark Queen... We bestow you this most excellent Toad Gear! Now you'll have cool moves just like us! Want to equip the Toad Gear?"

"Zitz: Whoa, battle-bro, not cool! You switched out of yourToad Gear! What gives? Want to equip the Toad Gear?"

"Zitz: Your decision, pal! But I'll be right here waitin' for you... If you come to yer senses!"

Rash, back at the camp:

"Rash: What's happenin', honorary Toad? We were just about to strike a toadally awesome pose! Get in on this!"

Pimple, back at the camp:

"Pimple: Yo Shovel Knight! Wanna rip down the Turbo Tunnel again? If you finish, you can win big! I'll just need 200 gold to cover, uh... the jet fuel!"

"Pimple: Not cool enough to ride? I get it. Well, come back when you're ready to shred some ramps."

"Pimple: Wow, you took that run to the NEXT LEVEL! I am so not worthy! Here, take this!"

"Pimple: Aw man, you almost had it! Victory was so close! Try again, chromeboy!" 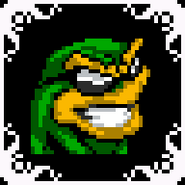 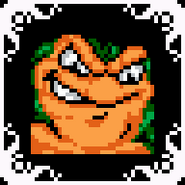 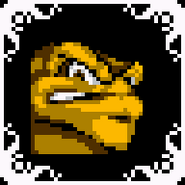 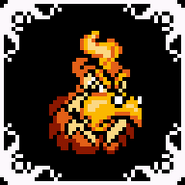 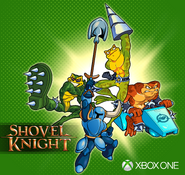 Promotional art.
Add a photo to this gallery

Shovel Knight and Battletoads Teaser
Add a photo to this gallery

Retrieved from "https://shovelknight.fandom.com/wiki/Battletoads?oldid=28098"
Community content is available under CC-BY-SA unless otherwise noted.