Shovel Knight Wiki
Register
Don't have an account?
Sign In
Advertisement
in: Shovel of Hope NPCs, Shovel of Hope Bosses, Plague of Shadows NPCs,
and 7 more

(Plains - Shovel of Hope and Plague of Shadows)

Plains, Tower of Fate: Entrance (Shovel of Hope, Plague of Shadows and Specter of Torment)
House of Joustus (King of Cards)

The Rival, The Defender (Shovel of Hope, Plague of Shadows and Specter of Torment)
The Royal Overture (King of Cards)

He is Shovel Knight's enigmatic, yet well-intentioned rival. His fighting style differs from Shovel Knight, despite their same choice of weapon.

As his name implies, Black Knight is clad in bulky, black obsidian armor that appears similar to Shovel Knight's but darker and more sinister-looking, as if he is the opposite of Shovel Knight. He wears a black barbute-styled helmet with long, pointy red horns protruding from the top. His shoulder pauldrons are outlined in red as well as a red pelvic area.

He wields a black Shovel Blade with a red-edged blade and handle.

Black Knight is portrayed as an arrogant, enigmatic foe against Shovel Knight. He displays confidence and malevolence during battles with his enemies, even manically laughing before and during his fights. He's always looking for a battle and doesn't answer to anyone, even including the powerful Enchantress.

However, despite being rivals, he also appears to have some good intentions in his interactions with Shovel Knight, warning him of The Enchantress and her Order of No Quarter to personally save Shield Knight, for which he appears to admire and respect. However it was due to cowardice that he did not take more decisive actions against The Enchantress, a fact that he himself begrudgingly admits and is ashamed of. He rescues Shovel Knight and brings him to safety to fulfill Shield Knight's wishes. He also expresses genuine concern towards the safety of his old friend Specter Knight as well as for his steed Terrorpin, even jumping after it down a pit after the latter had been badly injured. While initially antagonistic towards Plague Knight, due to misunderstanding the latter goals for hollow philandery, he later empathizes with him after realizing that his feelings towards Mona are not only genuine but also mutual between the two. He even goes out of his way in order to pacify the two. All in all, Black Knight's arrogant and brash attitude hides a noble soul with a strong sense of independence.

Black Knight is seen at the end of the Plains. When Shovel Knight arrived, he tried to dissuade him from reaching the Tower of Fate, but he ignored his warnings and defeated him. The Black Knight then fled defeated.

After fleeing, Black Knight is seen resting the unconscious Shovel Knight against the log whilst noting that he kept his promise to Shield Knight. He wishes Shovel Knight good rest and leaves.

Black Knight is seen at the end of the Plains and is trying to dissuade Magicist from helping Plague Knight with his research on the Ultimate Potion, but Magicist pretended to know nothing about it and left when she heard someone coming. Plague Knight met up with Black Knight and defeated him. The Black Knight then fled defeated.

Later, Black Knight is seen at the end of the Tower of Fate: Entrance. When Plague Knight arrived he asked him why he was talking with Mona and after getting the answer, he attacked Black Knight. They battled again but Plague Knight came out victorious for the third time. Black Knight noticed the knight's love for Mona, but didn't understand why he needs the Ultimate Potion. Plague Knight explained that if he uses it, Mona will love him, but Black Knight told him she already does. He didn't believe him and went inside the tower.

After Plague Knight and Mona destroyed the Tower of Fate, Black Knight and Polar Knight are seen together by a campfire.

Black Knight is later seen in Birder Bluffs, where he spied on Polar Knight, Tinker Knight and Mole Knight, who are seen meeting up and then looking at the Tower of Fate.

Black Knight awakens in the Colosseum, still sad from the apparent death of Terrorpin. His sadness turned into a shock as intruders approached.

After their battle and the fight with the Mirror, Black Knight returned to the Plains and vowed to find a way to save everyone.

Black Knight encountered The Enchantress and pled with her to stop her madness. She in turn told him that the Mirror reflects the truth and Black Knight is destined to join her. With no other options, Black Knight joined The Enchantress, mainly to protect Shield Knight trapped within her. But they got separated soon afterwards.

After reuniting, Black Knight pled with Shield Knight to fight her corruption. In turn, The Enchantress attacked him to make him her thrall for all eternity. Black Knight was defeated and then he fled.

The battles in the Plains of Passage and overworld are remarkably similar. Black Knight has some of the same moves as Shovel Knight, including the Shovel Drop, where he actually propels himself to dive faster with his blade, and won't bounce off should he hit his opponent. However, he can launch a large purple projectile attack, which can be reflected by attacking it directly with the shovel. During the second battle, he will deflect this back at you if you attempt to deflect it, until he lets his guard down, causing himself to get hit.

In the final battle against him at the Tower of Fate: Entrance, the battle starts similarly, except when using his purple projectile attack he will instead phase across the screen launching them. After a while during the battle, he will grow wings, which will fire thorns upon being released. In this form he will occasionally summon large meteors to strike the earth, with two meteors staying on the ground, that will cause damage to Shovel Knight upon contact. These cannot be destroyed by the player, but can by Black Knight, who will occasionally Shovel Drop onto them, causing them to explode. After a while his wings will disappear and he will retake his previous strategies, occasionally growing them again to restart the cycle. He also has a more powerful Shovel Dirt attack, which will launch multiple debris imbued with purple energy; glowing debris can be reflected by attacking with the shovel.

His fighting style is completely identical to that found in Shovel of Hope.

Black Knight engages Specter Knight using a different strategy: he fights while mounted on his trusty and shelled steed, Terrorpin. The two fight with a highly coordinated approach, along with some of Black Knight's more familiar moves. Only Black Knight can be damaged in these battles, Terrorpin is completely invincible.

When first fought in the Plains of Passage, Black Knight will stand atop Terrorpin, occasionally Shovel Dropping to either have Terrorpin a purple energy shot, or make himself more difficult to hit while Terrorpin charges. If hit at any point, he will be knocked off Terrorpin and follow his fight pattern from the first battle in Shovel of Hope. While Black Knight will still Shovel Drop, dig dirt orbs, slash with his Shovel Blade or even stop attacking and laugh, Terrorpin will attack as a separate entity attempting to ram Specter Knight until Black Knight remounts him restarting his previous pattern.

The second battle at the Tower of Fate: Entrance however is far different from the first. Black Knight starts the battle on Terrorpin as it hovers high in the air, too high to Dash Cut into Black Knight. Attacks that target the duo at this time simply knock them slightly back causing no damage. While hovering he will attempt to slam the shell into the ground when Specter Knight is underneath. The attack sends two small shockwaves across the floor. Black Knight then follows up by summoning orbs of energy infused dirt to surround the duo, before slamming Terrorpin's shell into the ground launching the orbs up into the air. Dirt clusters then fall from the sky starting at the room's edges and ending next to where the duo is hovering. The next act has Black Knight spinning in place on Terrorpin's shell before sending them both ricocheting off the walls to the ground. During this moment Black Knight will be vulnerable to attack and can thus be knocked off Terrorpin, causing him to transition into his dismounted attack pattern until he remounts Terrorpin and the cycle repeats.

Black Knight engages King Knight in Joustus as the boss of House of Joustus. His boss power is Meteor Smash, which destroys all cards in one row and sends them back into their respective decks. He also uses a card with his likeness. This card has two Standard Arrows, facing left and right and one Double Arrow, facing down.

At first, Black Knight was antagonistic towards Plague Knight due to him believing that his research into Ultimate Potion could be used to take over the world. He was further angered because this potion could be harmful for Shield Knight (The Enchantress at the time). He became a frequent obstacle for Plague Knight on his quest. Their relationship changed when Black Night learned of the true purpose for the potion. He brought Mona to Plague Knight as a sign of a good faith. He then left, probably now on good terms with Plague Knight.

At first, both knight were on good terms. The were glad to see each other when they've been trapped by the mirror. Things quickly turned sour since Polar Knight was already a part of The Enchantress's army. He wanted Black Knight to join them but he refused. Later, Polar Knight even insulted Black Knight's inability to protect his friends. Angry Black Knight attacked him in turn. Much later, after The Enchantress have been defeated and Tower of Fate destroyed, both knights have been seen sitting around the campfire, presumably mending their friendship in the process. 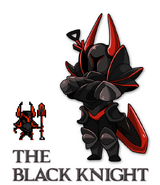 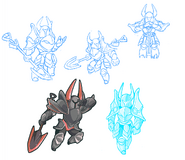 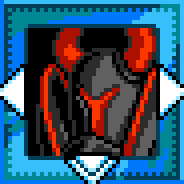 Black Knight when using him to reach the normal ending.