Blorbs are minor enemies in Shovel Knight: Treasure Trove and Shovel Knight Dig. They are small blob-like enemies which usually move slowly towards their foe and sometimes jump at them.

Regular Blorbs are green-colored and can only move slowly and jump. They possess two hit points and deal one damage point. They appear in the Plains, the Lost City, Knuckler's Quarry, the Explodatorium, the Iron Whale, the Forest of Phasing, and Tower of Fate: Ascent. Upon defeat they drop a green gem worth 10 gold and a blue gem worth five gold.

Blazorbs are red Blorbs on fire, possessing two hit points and dealing two damage points on contact. They appear in the Lost City, the Lich Yard Encounter, the Explodatorium in King of Cards, the Flying Machine in Specter of Torment, and Tower of Fate: Ascent. They're usually found already in a fiery state, but some can start out as normal Blorbs and then be ignited by coming into contact with any type of lava or fire hazard. Conversely, a Blazorb can be doused and turned into a regular Blorb if it touches water or any form of goo (including the bouncy green backside of Big Bohto).

Due to being on fire, Blazorbs can't be attacked from above; doing so will instead damage the player. Thus, Shovel Knight can't Shovel Drop on them, Specter Knight can't Dash Slash them, and King Knight can't spin jump on them. Upon defeat, they drop a green gem and a blue gem.

Blorbsidians are exclusive to Specter of Torment and only appear in the Stranded Ship. They are blue Blorbs with ice shards protruding from their bodies. They can be found jumping high from one specific place to another and are tougher than their other counterparts, possessing five hit points. They can also stick to walls, unlike their counterparts. They are primarily used as platform for Dash Slashes and do not pursue Specter Knight.

Jumbolorbs are exclusive to King of Cards and are only seen in the Explodatorium. As the name implies, Jumbolorbs are much larger than other Blorbs and can also jump much further. Jumbolorbs also have a shield on their front to protect them from King Knight's Shoulder Bash, and so should be defeated either from behind, by spin jumping on them or using Heirlooms. When defeated, a Jumbolorb will drop several red and yellow gems but also spawn four normal Blorbs.

All four Blorb variants have their own Joustus card.

In King of Cards, a Blazorb appears in the Cavern of Joustus as one of its players. Although it's possible to challenge him in this state, the Blazorb must be changed into and beaten as a Blorb in order to progress. To do this, King Knight must access a hidden room above the Mole Minion which contains a goo ball, and Shoulder Bash the goo ball onto the Blazorb.

When first talked to as Blazorb:

"Blazorb:
What?
You think I'm to small play? Think I need
hands
to hold a hand of cards? Think just 'cause I'm a
Blazorb
. I can't play Joustus!? Well you're
wrong
. I hold my cards in my mouth! Do you
really
want to stand in my way?"

"Blazorb: I lost, but victory is just ash in your mouth! To win for real, battle me when I'm less.. heated, baby!"

When first talked to as Blorb:

When challenged as Blorb

"Blorb: If you defeat me, your quest advances. Good luck to you, friend. If I may call you that? May the best Blorb win."

Original Blorb with various other enemies. 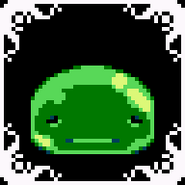 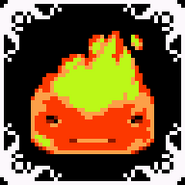 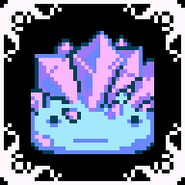 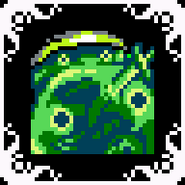 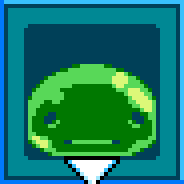 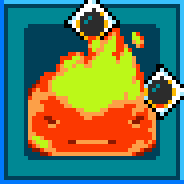 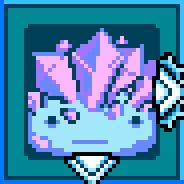 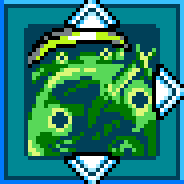 Blorb's portrait in Pocket Dungeon.
Add a photo to this gallery

Retrieved from "https://shovelknight.fandom.com/wiki/Blorb?oldid=36171"
Community content is available under CC-BY-SA unless otherwise noted.