Body Swap Mode (originally called Gender Swap[1]) is a feature in Shovel Knight: Treasure Trove that lets players choose the gender of the main characters in  Shovel of Hope. The concerned characters are Shovel Knight, Shield Knight, Black Knight, the Enchantress and the members of the Order of No Quarter.

The gender of all main characters in the game can be swapped selectively. For example, there can be both a male Shovel Knight and a male Shield Knight.[1] Pronouns for each of those characters can also be swapped selectively (for example, a Shovel Knight with a female body can go by male pronouns in the game). The menu for Body Swap can be accessed at any point during the game.[1] Changes will only be effective after exiting the current stage and entering the map. Originally Body Swap Mode only allowed to change pronouns into their masculine or feminine forms, but in December 2019 the option to choose gender neutral pronouns was added. 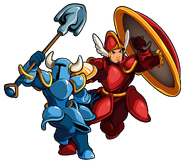