Start a Wiki
watch 02:38
The Loop (Games)
Do you like this video?
Boneclangs are common minor enemies in Shovel Knight: Treasure Trove and Shovel Knight Dig. They first appear in the Plains, then the Lich Yard and later on Tower of Fate: Entrance. They are skeletons clad in armor and wielding a sword, and are declined in several varieties with different attributes. In Specter of Torment, many Boneclangs wander around at the Tower of Fate hub.

The common Boneclang has a slight pink tint to its bones and wears a gold breastplate. They have two hit points and can attack with a simple swipe that does one full health bubble of damage. On death they drop their skull. The skulls can be hit by the player, causing them to break, but can also be used to damage enemies. Their heads and bodies can often be found unattached.

Boneclang Honchos are identical to the common Boneclangs, except for the giant crown they wear. On death their skull retains the crown and cannot be destroyed. Importantly, this still weighs down the skeleton platforms. They only appear in the Lich Yard. The player must be cautious, because the big skull head might cause the platform to sink, leading to the deadly water unique to the Lich Yard. Also, when the player takes away the skull head, the skeleton platforms will raise all the way up and will potentially crush the player. However, the player can lower the platform by jumping up. These skulls also crush enemies in one hit. They don’t appear in Specter of Torment.

The Loose Boneclang is solid white with red armor. When first struck, its skull detaches, rendering the Boneclang blind. In this state, it will simply walk forward until it reaches a ledge or collides with something solid, prompting it to turn and walk in the other direction. They only appear in the Lich Yard.

Brittle Boneclangs have a notable green tinge and wear grey armor. What sets them apart from the other Boneclangs is that they only possess one hit point. Notably, Specter Knight can summon three of them to aid him. They appear notably in the Lich Yard and Tower of Fate: Ascent. One also appears near the end of the Plains in Specter of Torment.

Moreover, in Specter of Torment Specter Knight can summon a Brittle Boneclang with the upgraded Skeletal Sentry, which stands still and fires flame arrows in the direction Specter Knight faces.

Sentry Boneclangs are summoned by Specter Knight using the regular Skeletal Sentry. They only shoot a straight line of flame arrows before exploding.

Rising Boneclangs only appear in in the Explodatorium in Specter of Torment. As opposed to other Boneclangs, they spawn to ambush their target. They attack by jumping forward and slashing.

Dancer Boneclangs are red and wear a black armor. They only appear during the dance ceremony performed by Red and Scarlet in Specter of Torment, after Specter Knight gives the 80th Red Skull to Red.

One of the Joustus cards in King of Cards is a Boneclang card which can push other cards to the left and right. These are both single arrows.

One of the Joustus cards in King of Cards is a Boneclang Honcho card which can push other cards to the left using its Double Arrow. It's also a Slam card, which means it will automatically try to push all adjacent cards when first placed on the board.

Boneclang at the banquet after completing Plains:

"Boneclang: Oh, it's you! I saw you slicing and dicing through the plains earlier. Wow! Round of juice on me!"

"Boneclang: I hope more and more people feel inspired to join the Enchantress!"

"Boneclang: Every stage has a Wisp Chest, find it to permanently increase your Will or Darkness!"

"Boneclang: If I can't get a Red Skull without falling in a pit... then I just get it! Who cares, I still keep the skull!"

"Boneclang: A strange aura surrounds you, reaper. Why do you cling to this mortal coil?"

"Boneclang: If things are looking too grim.. try using Curios."

"Boneclang: The Lich Yard is emptying out fast. Homes and graves, big and small, everyone's just taking off! Eerie..."

"Boneclang: Being immortal sure gets boring! Most of us lost souls are just happy to have some direction."

"Boneclang: Graveyard Arrows allow for versatile movement! For some reason, I have felt at home in graveyards lately."

A Boneclang with various other enemies. 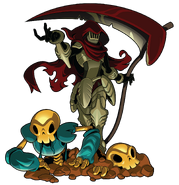 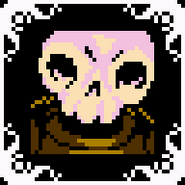 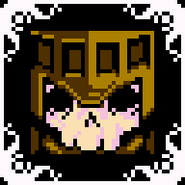 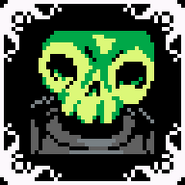 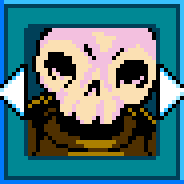 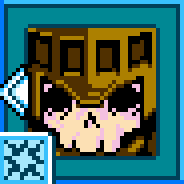 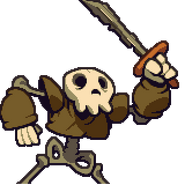 Boneclang's portrait in Pocket Dungeon.
Add a photo to this gallery
Retrieved from "https://shovelknight.fandom.com/wiki/Boneclang?oldid=36335"
Community content is available under CC-BY-SA unless otherwise noted.