The Twilight of Tomorrow

Cardia is a supporting character in King of Cards. She is a mysterious traveler and Joustus player aboard the Glidewing who has great interest in the Valley's diversions. She promises to reward those who can defeat the Champions at each House of Joustus.

Her reward is, in fact, a trip to her home planet, as it is revealed she has been searching for a "Hero of the Ancients" for "light years". If King Knight beats her in a game of Joustus, a fight between King Knight and Cardia, now called Giga Cardia, starts.

Cardia is a young woman with pale skin, pointy ears and purple hair tied in a bun. She wears a purple outfit with gold jewelry dangling off of a cape and skirt.

In her true form, her hair takes on a shade of pink and her outfit's colors becomes similar to the colors of The Enchantress's fireballs.

In her Giga Cardia form, she bears a striking resemblance to the Remnant of Fate, but in a different color scheme and smaller size.

When King Knight first attempts to use the Rat Rope outside of the House of Joustus, Cooper and the Bard approach him offering him a partnership to claim the Joustus crown. King Knight accepts, and the three use the rat rope that leads them aboard the Glidewing, Cooper's airship. After Cooper welcomes King Knight, he can walk to the upper levels of the Glidewing, where he'll find Cardia.

When King Knight approaches her, she introduces herself and says she has a great interest in the diversions of the Valley. She then offers to challenge King Knight in a game of Joustus. If King Knight is beaten, she will not steal a card.

If King Knight beats every Joustus champion, Cardia will reward the player with a trip to her homeland, where a final Joustus match is initiated. Much like her previous match, she won't take a card from the player should they lose, and there is no penalty for a rematch. If the player succeeds in beating her, she will proclaim King Knight is the "Hero of the Ancients" and persuade him into going to her planet as a messiah. He will refuse, on the grounds that he is a king and therefore if he doesn't get any servants out of it, he is not interested. Cardia will proclaim she traveled for light years to find this hero, and initiates a fight with the player out of rage. King Knight will have absolutely no Vigor at the start.

If King Knight beats Cardia in her fight, she will give the player the Card Crystal, which shows the location of all Joustus cards not yet obtained. She will also give the player her own card, as well as her "Giga Cardia" card. She then leaves to find another champion to be her planet's hero, sadly saying farewell to the king of cards. Cardia will be nowhere to be seen on the Glidewing after this event.

King Knight will have no Vigor during the fight, except if he uses a Decree of Rejuvenation or if he has the Vestments of Vigor equipped. These are Giga Cardia's attacks:

When Giga Cardia has crystals orbiting around her and she orbits downwards, King Knight can bounce on top of her crystals without her actually launching them. This is useful for longer attacks like when she launches her red crystals.

When King Knight first speaks to her aboard the Glidewing:

"Cardia: Ah, another traveler joins our air-faring crew. I'm Cardia, and I have a great interest in this land's diversions. Joustus shines light on the heart. Shall we glimmer together?"

If King Knight accepts her challenge:

"Cardia: As long as life exists, there will be games. It's all part of the cycle!"

After beating her for the first time:

"Cardia: What a thrill! I can see why the others have put their hope in you. And now you have my hope as well. Return to me when the Houses of Joustus lay ousted. And don't think there's no reward. In fact, it is beyond your dreams."

When spoken to after beating her for the first time:

"Cardia: Travler, it's always a pleasure to cross paths. An aura of good surrounds you, despite the japes of our cohorts. Listen, I know I promised you a reward, and I intend to make good on it. But more Houses of Joustus remain to be conquered."

After beating the first Joustus champion:

"Cardia: Your first Joustus champion has been defeated. You are on the path toward true illumination."

After Beating the final Joustus game with her:

"Cardia: I hearby title you... Hero of the Ancients. Come with me to my planet! You will save us in glory as our hero!"

"King Knight: Hah! What I'll do in glory, my two-faced friend, is
rule
with an iron fist. Unless your entire planet is prepared for
that
...
No deal
."

"Cardia: ..What? How could you? ..A planet's worth of people! You'd leave them all to their fate? Simply reject your calling as Hero of the Ancients?"

"King Knight: Unless you're ready to become my servants, then I'm not interested. Return me to my kingdom at once!"

"Cardia: Impossible.. After light years of searching, you would let my planet perish?
I'll
annihilate
you
from
existence!
"

"Cardia: No prophecy could foretell this tragic development. I suppose I must venture to other realms to find our hero. ...I'd intended to give you this as a welcome gift, but I suppose it's no longer required..."After getting the Card Crystal:
"Cardia: Now, you'll be able to find the location of any Joustus card you desire. *sigh* Farewell.. "King of Cards"." 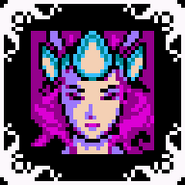 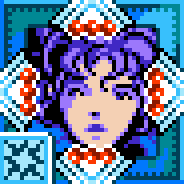 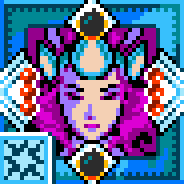 Giga Cardia boss fight.
Add a photo to this gallery
Retrieved from "https://shovelknight.fandom.com/wiki/Cardia?oldid=36433"
Community content is available under CC-BY-SA unless otherwise noted.