Start a Wiki
Clockameleons are minor enemies found only in Specter of Torment. They appear as mechanical blue lizards that cling to a surface before rocket jumping to an opposite one. The mechanical key on their back only winds when they are crawling or jumping.

Clockameleons are only met in the Clockwork Tower. They either cycle from one surface to another or wait for Specter Knight to approach and jump at him. They posses three hitpoints and deal half a damage point. They drop a blue gem worth 2 gold and a jar when defeated. 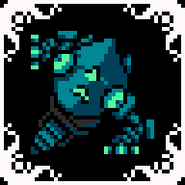 Joustus card portrait.
Add a photo to this gallery
Retrieved from "https://shovelknight.fandom.com/wiki/Clockameleon?oldid=24884"
Community content is available under CC-BY-SA unless otherwise noted.