Cogslotters are minor enemies who throw cogs in a circular arcs alternating up and down. They are found in the Clockwork Tower stage. In Specter of Torment, one Cogslotter appears as an NPC after Tinker Knight's defeat and another could be seen attending Creech's bar.

Cogslotters walk back and forth, although they can be at a standstill if walking on a conveyor. They either aim their tool up or down a few seconds before firing a cog, making it easier to guess the cog's trajectory. They have four hitpoints and drop two red rubies and a jar when defeated.

One of the Joustus cards in King of Cards is a Cogslotter card which has 1 Conveyor Arrow facing up and 1 Double Arrow facing left.

Cogslotter after completing the Clockwork Tower:

"Cogslotter: This tower is primitive. Ours is way more mechanical. I wish we could come in here and hook things up properly."

"Cogslotter: Who invented Joustus in the first place? Are they hiring?"

"Cogslotter: After a long day in the factory, ahh. This breathtaking panorama. It's all the fulfillment I need. But... I suppose you're here for a match, eh?"

"Cogslotter: The gears of life never stop turning, even for a moment. You've gotta enjoy it." 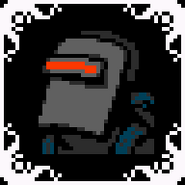 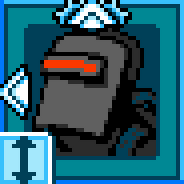 Cogslotter's Joustus card.
Add a photo to this gallery
Retrieved from "https://shovelknight.fandom.com/wiki/Cogslotter?oldid=35645"
Community content is available under CC-BY-SA unless otherwise noted.