Creech is a character in Specter of Torment. He tends to the juice bar at the Tower of Fate for the members of the Order of No Quarter.

Creech is a large anthropomorphic vulture with green feathers.

When met at the beginning of Specter Knight's quest to form the Order, Creech seems tired of running the bar because of how few customers he has. With more knights and their minions joining the Enchantress, Creech rejoices to the sudden surge of clients. When all knights joined, Creech is confident his juice bar will be lasting for a long time.

"Creech: It sure is drafty in here, but still, I carry on. Just a joke, ya know. While scavenging for customers."

"Creech: Hey! a bit of business! It was slim pickings before, but now I have some prey to circle."

"Creech: Well, I'm all juiced up! Customers are just pouring in! Thanks for sticking your neck out for me."

"Creech: Everyone's come home to roost. I have a good feeling that this juice bar is going to be around FOR A LONG TIME." 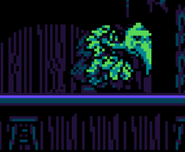 Creech in-game
Add a photo to this gallery

Retrieved from "https://shovelknight.fandom.com/wiki/Creech?oldid=26157"
Community content is available under CC-BY-SA unless otherwise noted.