Croaker is a character in Shovel Knight: Treasure Trove. He enjoys telling puns to people.

Croaker looks like a light green colored bipedal frog with a beige colored vest and brown trousers. He is always cheerful when telling a pun, as opposed to his grumpy counterpart Toader.

In Shovel of Hope, Croaker can be found in the Juice Bar's reserve under the Village. He tells Shovel Knight some of his puns and appreciate if he stays to hear them all.

He also appears at the Mysterious Area after the exclusive fight with the Battletoads. His new Battletoads puns are however not to the liking of Toader. He can also occasionally ends in the middle of the Battletoads and Shovel striking a pose and joins them while Toader leaves, annoyed.

Croaker reappears in the ending with Toader and the rest of the Village to cheer on the defeat of the Enchantress.

Croaker only appears in the ending of Plague of Shadows, watching the fall of the Tower of Fate and celebrating with the townsfolk.

In King of Cards, Croaker appears has a Joustus Puzzle that he can't solve and asks for King Knight's help.

"Croaker: Hey Shovel Knight, I know things are tough, but don't throw in the trowel!"
"Croaker: Pshh, that King Knight. You give him an inch, he thinks he's a ruler!"
"Croaker: I traveled with some horse adventurers, but they were all so neigh-gative!"
"Croaker: I was afraid as I jumped over the bottomless pit... but then I got over it."
"Croaker: I wondered why the Black Knight's shovel was getting bigger. Then it hit me!"
"Croaker: I'm sure your quest will pay off in spades, hero!
Ha ha ha ha ha!
"
"Croaker: The Goatician? He may feast on valuable Meal Tickets, but overall, he's not a
baa-a-a-a-a-ad
fellow!"
"Croaker: Super skeletons are way too serious! They can't take a little humerus ribbing!"
"Croaker: The Bard performs on the street because when he's inside, he can't conduct himself!"
"Croaker: Have I told you about the broken sword? Eh, never mind, it's pointless..."
"Croaker: Plague Knight tried to tell me a joke, but it was too formulaic. He failed to get any reaction!"
"Croaker: I talked with Mona the other day...bad attitude, breaking breakers everywhere...such a vial woman!"
"Croaker: Have you talked to the Juice Maid? I tried to squeeze her for information... But I'm not sure she had anything pulpy to extract! My efforts were toadally fruitless."
"Croaker: I applied to be a Troupple Acolyte, but they said my apple-ication looked fishy..... so they hired me!"
"Croaker: Using a shovel as a weapon... what a groundbreaking idea!"
"Croaker: Arrow signs are all the rage in the village these days, but I think they're on the way out."
"Croaker: I forgot what Reize was using as a weapon... but then it came back to me!"
"Croaker: Propeller Knight can fly around using a bladed propeller helmet. Now that is cutting edge!"
"Croaker: You visited the nightclub down in the mines yet? A swingin' abyss!"
"Croaker: How about the new hotel in the Iron Whale? I found their rooms sub-standard, and the place was a wreck."
"Croaker: The Baz is a master of the rope whip. Natural talent, or was he taut?"

After hearing all of his puns:

"Croaker: Thanks for listening to all of my great jokes! I'd ask for a tip, but a well-told pun is its own re-word."

Croaker's puns on the Battletoads:

"Croaker: Woah, hey, we should join these guys! And then we'd call you... Battle Toader!"
"Croaker: Face to face with the Battletoads! What a
rare
opportunity!"
"Croaker: You see Shovel Knight's new Toad Gear? Looks like he got it a pond shop!"
"Croaker: We toads are just so extreme for some people... You could say we're a... tad polarizing!"

Croaker at the House of Joustus:

"Croaker: Did you know, it took three plains to travel here. And boy, are my armors tired! You made it all the way up here just to look at my Joustus puzzle? Then let me summit up nicely for ya'! You'll have to win in one move. Call it single combat. Wanna try my puzzle?"

After beating the first puzzle at the House of Joustus:

"Croaker: Wait, you figured it out? That was suppuzzledly impuzzleable! You are Joustus-stounding! Well, have you pieced it together yet? There's more than one puzzle! I've still got a stack of conundrums on deck. Care to cut in?"

After beating the second puzzle at the House of Joustus:

"Croaker: It doesn't take a king to realize that solving this last puzzle may be a feudal task. Will you dig in and break new ground with your shuffle?"

After beating the third puzzle at the House of Joustus:

"Croaker: Joustus has been served, at long last! I must card-tribute to your noble cause!"

When talked to after beating all of the puzzles at the House of Joustus:

"Croaker: I really got to hand it to you. Thanks for dealing with all my card problems!"

Croaker and Toader at the Crag of Joustus:

"Croaker: Hop over to our pad and lend us an ear hole. Water we gonna dew about this puzzle?"

"Toader: Sorry, I don't know. Ugh, maybe
he
should just solve it."

After beating the first puzzle at the Crag of Joustus:

"Croaker: You solved it! I'm green with envy. Your skills are so fly, you've got me tongue-tied! We overheard the champion down below. They had quite a husky voice! It's hard to
convey
howl ruff this puzzle is. Want to try wolfing it down?"

After beating the second puzzle at the Crag of Joustus:

"Croaker: We'd treasure your help on this last one. It's gild our enthusiasm. Truly, we're gemboozled!"

"Toader: Cascade arrows make my cards and my head spin... But you can try it.."

After beating the third puzzle at the Crag of Joustus:

"Croaker:
Wow!
Truth be toad, we knew you'd swim through this webbing of puzzles! Take this, chum."

When talked to after beating all of the puzzles at the Crag of Joustus:

"Toader: I don't know what's worse.. The puzzles, or the jokes. I can't believe you endured it all." 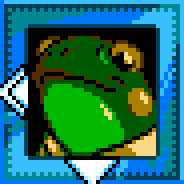 Croaker in King of Cards.
Add a photo to this gallery
Retrieved from "https://shovelknight.fandom.com/wiki/Croaker?oldid=32848"
Community content is available under CC-BY-SA unless otherwise noted.