Shovel Knight Wiki
Register
Don't have an account?
Sign In
Advertisement
in: Shovel of Hope NPCs, Specter of Torment NPCs

Village (Shovel of Hope)
Tower of Fate (Specter of Torment)

The Dancer is a minor character in Shovel Knight: Treasure Trove. As her title suggests, she enjoys dancing.

The Dancer is a woman wearing a green dress and sporting a green Afro haircut. She is joyful and can get quite offended when her dancing skills are ignored or criticized.

In Shovel of Hope, the Dancer can be found in the Juice Bar under the Village. She has a grudge against Specter Knight and claims that she will offer her greatest treasure to whoever defeats him. After beating Specter Knight, she rewards Shovel Knight with her dance, which consists in dancing around the tavern (including on the bar) while Grandma Swamp, the Juice Maid, and the Deposed King cheer her on.

She reappears in the ending, dancing with the Troupple King, his acolyte and a school of Troupples to celebrate the defeat of the Enchantress.

In Specter of Torment, the Dancer appears at the Tower of Fate after Specter Knight clears the Lich Yard. She wants to keep morale high around the troops of the Enchantress and starts dancing. However Specter Knight is unimpressed and refuses to watch her dance. After her performance, he expresses his disgust, much to her shock. The Dancer explains that she learned that dance specially for him, but he blows her off, and she runs off with a broken heart, swearing revenge.

"Dancer:
Oooh!!!
That Specter Knight! If someone could defeat him, I would bestow upon them my greatest treasure."

"Dancer: Hey you, watch me dance!"

"Dancer: Hello! I saw you dashing through the Lich Yard. You must be Specter Knight! I'm so happy to finally meetcha! Keeping morale high around here is important, so to welcome you, let me share my greatest treasure!
Dance!!!
" 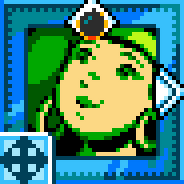 Sprite.
Community content is available under CC-BY-SA unless otherwise noted.