Follower of the Troupple King

Dark Acolyte is a supporting character of Specter of Torment encountered at the Tower of Fate. The Enchantress has assigned him to operate the Magic Mirror for Specter Knight, which allows him to transport directly to the locations of potential recruits for the Order of No Quarter.

Dark Acolyte also appears as a supporting character in Shovel of Hope, Plague of Shadows, and King of Cards as a Troupple Acolyte.[1][2][3]

Dark Acolyte is a small, green skinned young man with black hair, wearing a black cloak with a green hood similar to Missy's. He always carries around a book.

While he serves the Enchantress, he is not truly evil, judging her for what she is when her folly becomes too much to bear. He then seeks redemption for his participation in her plans and agrees to help Specter Knight in order to stop her.

After being corrupted by the Cloaked Figure and joining her forces, Dark Acolyte worshipped her and followed her commands. After Reize breaks in the Tower, Dark Acolyte is trapped in the Tower's dungeon, until Black Knight opens a hole where he could escape. After those events, the acolyte grew a hatred for the Enchantress and helped Specter Knight defeat her, going as far as modifying the Mirror of Fate to try trapping her.

Dark Acolyte and Missy seem to be friends. In the ending of King of Cards, both are seen spying Specter Knight as he reflects on his Keepsake Locket, and in the ending of Specter of Torment Missy is seen going to the Troupple King with Dark Acolyte because he was too scared to go alone, showing she is supportive towards her friend.

In Shovel of Hope, a male Troupple Acolyte is encountered in the reserve of the Juice Bar in the Village. He spreads the Troupple King's word and can sell two Troupple Chalices to Shovel Knight. He reappears in the ending, celebrating the fall of the Enchantress with the Troupple King and the Dancer at the Troupple Pond.

In Plague of Shadows, a male Troupple Acolyte appears in the ending alongside a female one, celebrating the defeat of the Enchantress with Oolong and the Troupple King.

Dark Acolyte was commanded to operate the Mirror of Fate and help Specter Knight recruit the Order of No Quarter. He flees his post at the Magic Mirror when the Enchantress appears to confront Reize, who intruded on the tower. She assigns Reize, corrupted by her power, to guard the mirror, and has the Dark Acolyte thrown in the dungeon for his cowardice. She leaves him alive for him to ponder on his fate, instead of letting Reize destroy him.

At the end of Specter of Torment, the Dark Acolyte pleading to return to the Troupple King's side. He grants him his wish and turns him back into a Troupple Acolyte to serve him.

After beating the Troupple King, a male Acolyte will show up and join him in accompanying King Knight. He will from then on act as the Troupple King's personal representative, the King himself being too big and unfit to move anywhere on dry land. In the ending, Cloaked Figure is seen trying to corrupt other Troupple Acolytes[4] but only succeeds in Dark Acolyte.

When falling off the Tower of Fate:

"Dark Acolyte: My lord! I was afraid we'd lost you for good! Please, you must watch your footing on the tower!"

When talking to him next to the Magic Mirror:

"Dark Acolyte: Hail, Lord Specter Knight! Glory to the Enchantress! She has entrusted
me
to operate this dark portal. Cross through it, and you'll reach your target in a mere moment! Shall I prepare the Magic Mirror for your departure, my Lord?"

When leaving the Magic Mirror hall immediately after entering it:

"Dark Acolyte: My lord, are you leaving already? I've been practising day and night to aid you in your mission... Well, you can press [x] to talk to me once you're ready!"

"Dark Acolyte: Specter Knight! A sight for sore eyes! I might have starved in that cell! The Enchantress is... treacherous! Villainous!
Irredeemable!
"
"Specter Knight: Acolyte! Indeed, she has gone mad with power, and must be defeated. Can you help me reach her?"
"Acolyte: Yes! A path from the dungeon to her lair now lies open to us! I can operate the mirror, too.. just like old times, eh? We haven't a moment to lose!"

When talking to him after his escape:

"Dark Acolyte: Time grows short! A signal when ready, if you please."

About the Lich Yard:

"Dark Acolyte: I've heard tell of a phantom who haunts the Lich Yard. You're brave to tread there. Be wary!"

About the Clockwork Tower:

"Dark Acolyte: Tinker Knight is the finest engineer in the land! Will he agree to build our tools of destruction?"

"Dark Acolyte: King Knight looks over Pridemoor from this castle, but his.. ehh.. renovations appear to have stalled."

About the Stranded Ship:

"Dark Acolyte: Ah, the Plains. I see you.. ahem.. found the Black Knight... but are there other treasures to be won?"

"Dark Acolyte: Can the mad alchemist Plague Knight be bent to our cause? His potions would be a boon, if he can be tamed!"

About the Lost City:

"Dark Acolyte: An odd fellow, Mole Knight. With his excavation skill, we can dig out great vaults, and undermine our foes!"

About the Iron Whale:

"Dark Acolyte: Who's a wealthier financier than Treasure Knight? With his sunken riches, the tides will turn indeed!"

About the Flying Machine:

About Tower of Fate: Entrance:

"Dark Acolyte: With luck, you can approach stealthily through this ruined floor. Make haste, Specter Knight!"

"Dark Acolyte: Go through my former cell... but walk lightly, for the final path is fraught with danger!"

When selecting any destination:

"Dark Acolyte: My lord, are you prepared to visit [x]?" 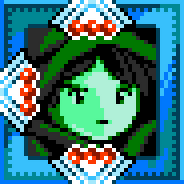 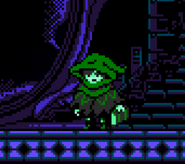 Dark Acolyte in-game.
Add a photo to this gallery

Retrieved from "https://shovelknight.fandom.com/wiki/Dark_Acolyte?oldid=35912"
Community content is available under CC-BY-SA unless otherwise noted.