Being a Director for a Day was one of the reward tiers in Shovel Knight's Kickstarter campaign. By donating $1000, backers could become Directors for a Day and work with Yacht Club Games to design a major character, boss, midboss, or scenario. Ten positions were available, but only five were filled. Each of them worked with the game developer to flesh out an idea and add it to the game. Four of the six Directors for a Day added the characters that make up the Wandering Travellers.

The five Directors for a Day and their contributions to Shovel Knight are:

Mark Bozon from WayForward Technologies was also Director for a Day, but did not contribute to the creation of a character in particular. 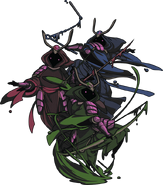 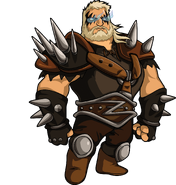 Baz by Matt and Woolie of the Best Friends Zaibatsu
Add a photo to this gallery
Retrieved from "https://shovelknight.fandom.com/wiki/Directors_for_a_Day?oldid=33708"
Community content is available under CC-BY-SA unless otherwise noted.