Divedrakes are minor enemies in Shovel Knight: Treasure Trove. They are small green flying dragons that usually serve as minor annoyances or a way to get across pits or reach higher areas (by using the Shovel Drop, Dash Slash, or Shoulder Bash to bounce off them). They appear in the Plains, Forest of Phasing, Plains Encounter, Tower of Fate, Mysterious Area, and Birder Bluffs.

Divedrakes have two hit points and drop a blue gem when defeated.

Divedrakes are relatively harmless enemies, as the majority of them simply either fly up and down, back and forth, or all the way across the screen. However, some Divedrakes are more aggressive and will follow the player, occasionally diving at him.

Icedrakes are found only in the Stranded Ship and related thematic challenges. They follow a similar back and forth flying pattern in the first part of the stage, then swooping attack pattern in the second. They are invulnerable everywhere except on their red tail and bulging throat. They can be bounced on indefinitely with the Shovel Drop and Dash Slash to reach new heights.

Firedrakes are exclusive to King of Cards, appearing in the Lost City stages. Unlike the Divedrakes and Icedrakes, they only move upwards and downwards, occasionally spitting a fireball straight ahead.

One of the Joustus cards in King of Cards is a Divedrake card with Standard Arrows facing up and down. 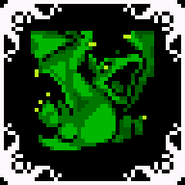 Still sprite of the Icedrake
Add a photo to this gallery

Retrieved from "https://shovelknight.fandom.com/wiki/Divedrake?oldid=28492"
Community content is available under CC-BY-SA unless otherwise noted.