Flower Dolly is a minor character in Shovel Knight: Treasure Trove. She fancies nice clothing at the Armor Outpost.

Dolly is a tall, skinny, young woman. She wears an orange seamless dress, black shoes, and an orange vintage cap. She has long, curled up brown hair.

In Shovel of Hope, Dolly can be seen at the Fancy Shop in the Armor Outpost. She is looking into buying a beret, but cannot afford it. She asks Shovel Knight if he is able to buy it for her. When he does so, she thanks him and leave the outpost. She returns after the commotion with Mr. Hat, although looking this time into buying a dress to match her beret.

Dolly reappears in Pridemoor Keep in the ending, among the reformed court of King Pridemoor.

In Plague of Shadows, Dolly can be seen in the Fancy Shop. She is already gone by the time Plague Knight falls inside the Armor Outpost.

In the ending of Specter of Torment, Dolly can be seen fleeing from the Fancy Shop as the forces of the Enchantress attack the Armor Outpost.

In King of Cards, Dolly can be encountered at the Void Crater trying find Mr. Hat to buy a beret. She also gives out his card to King Knight.

When refusing to lend her money:

When lending her the money:

"Dolly: Hooray! This is just what I needed! Thank you, hero!"

"Dolly: Even with a new beret, my life feels incomplete... Maybe I need a new dress with it!" 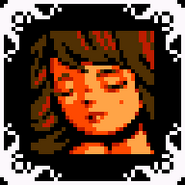 Older version of Dolly's portrait in King of Cards.

Retrieved from "https://shovelknight.fandom.com/wiki/Dolly?oldid=36067"
Community content is available under CC-BY-SA unless otherwise noted.