Duelist Di was an adventurer and former sponsored Joustus champion of Cooper, Bard, and Doe, who was unknowingly killed by a "magic most foul" in her adventures throughout The Lich Yard.

Duelist Di was Cooper and Bard's first sponsored champion that they encountered in the Plains.[2] She traveled with them in the Glidewing, until they reached the Lich Yard, the place where Duelist Di died for unknown reasons. Cooper and Bard became sad and went in search of a new champion.[3] Duelist Di, however, was unaware of her fate and thought that the being that killed her had simply bewitched her. After King Knight bought the Dueling Glove and recruited Duelist Di to the Glidewing, she became aware of her fate. During the ending, after being betrayed by King Knight, she was locked in the Hall of Champions by the Phantom Striker.

"Duelist Di: Halt! There's danger ahead. A magic most foul has bewitched my trusty Dueling Glove. I cannot wear it. The glove simply falls through my hand. Perhaps you'd equip it instead?"

"Duelist Di: Please, return before long. I've a grand calling, and a quest to complete!"

After buying the Heirloom:

"Duelist Di: Let's make haste! And Shoulder Bash not, lest we meet our untimely demise."

"King Knight: I get the feeling you've already met your.... Mmm, never mind. See you shortly!"

At the end of the course:

"Duelist Di: We've survived! The Glidewing awaits, and I'll be able to pursue the Joustus Crown in fine spirits."

"King Knight: That sounds like my own..... Wait,
what?
How do you know about the Glidewing?"

"Duelist Di: Well, I'm the Joustus champion they've chosen, and I aim to become King of Cards with the help of her crew!"

"King Knight: ...How curiously bizarre... Come with me, would you?"

"Duelist Di: King Knight. You didn't tell me I'd become a ghost, unsuitable as a Joustus champion. You could have told me."

"King Knight: Yes, well, it was a bit of a complicated matter, you see."

"Duelist Di: I cannot complete, but I still carry coin. May due patronage be more useful to you than it was to me. Here!"

If talked to again:

"Duelist Di: Care to play Joustus? I've no future to lose now, only time to waste."

"Duelist Di: Let us duel, then! My body may be insubstantial, but the tension is palpable!" 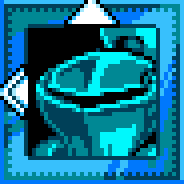 Duelist Di after you buy her Heirloom.
Add a photo to this gallery

Retrieved from "https://shovelknight.fandom.com/wiki/Duelist_Di?oldid=36914"
Community content is available under CC-BY-SA unless otherwise noted.