Fairies are minor enemies in Shovel Knight: Treasure Trove. They appear as furry gray flying creatures with two tiny legs, wings and rabbit-like ears. They can be found in the Explodatorium, Stranded Ship, Clockwork Tower, and Tower of Fate: Entrance.

Fairies steadily float slowly and directly towards their target, even through walls. Once in range, they swoop down with a fast biting attack. They have only one hit point and deal half a damage point. Upon death they drop a 5 gold worth blue gem and a jar. They also try and knock their target off of platforms, often into pits.

Fairies can quickly chain attacks on their target if not dealt with swiftly. They are best dealt with with a ranged attack or by luring them in range of main weapons.

Flaries are a new type of Fairy debuting in King of Cards, appearing only in the Tower of Fate. They behave exacly like normal Fairies however, when a Flarey takes damage it starts glowing for a few seconds and then explodes, damaging King Knight if he gets caught in the blast radius.

One of the Joustus cards in King of Cards is a Fairy card with a Double Arrow facing left. 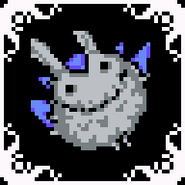 Joustus card portrait.
Add a photo to this gallery
Retrieved from "https://shovelknight.fandom.com/wiki/Fairy?oldid=28364"
Community content is available under CC-BY-SA unless otherwise noted.