Knight, guard to the Village's entrance

Farrels is a recurring character in Shovel Knight: Treasure Trove. He is the guarding Knight and peace keeper of the Village.

Farrels wears an iron armor and leaves his helmet open.

In Shovel of Hope, Farrels halts Shovel Knight the first time he tries to enter to warn that weapons are forbidden inside. He lets him in after realizing it's just a shovel and not a sword. He also reminds Shovel Knight how to talk with other characters.

A knight in the same armor as him appears in the ending, regrouping with the rest of the village to cheer on the fall of the Tower of Fate.

In Plague of Shadows, Farrels also halts Plague Knight as he enters the Village, but instead recognize the alchemist and forbids him passage.

Again in the end, a knight wearing the same armor as him watches the fall of the Tower of Fate with the rest of the villagers.

In the ending of Specter of Torment, Farrels can be seen sleeping with a Memmec on his guard post at the Village's entrance. He fails to spot Specter Knight carrying an injured Reize to the doorstep of Hedge Pupil's house.

In King of Cards, Farrels appear in the Old King's Crypt and mentions the decrees.

When first entering the Village:

"Farrels: Halt! No weapons! We have enough to worry about lately without everyone swinging swords around! Oh, ha ha, that's no weapon, just a shovel... You may enter, then! And don't forget... Press [x] to talk to everyone!"

"Farrels: Cause no trouble, warrior!"

When first arriving in the Village:

"Farrels: Halt! No weapons allowed! Wait a minute!! Lets just pretend I don't recognize you, and you go safely on your merry way. This doesn't have to get messy. And don't show your creepy bird face around here again,
freak
!"

When talking to him:

"Farrels: Cause no trouble, warrior!"

When forcing passage into the Village:

"Farrels: Halt! Maybe you didn't hear me through that mask. We already had this conversation, pal. You're not supposed to be here. Now get lost before I lose my patience."

"Farrels: Look, buddy, don't make me call for backup. I'll do it. Just take a hike, all right?"

"Farrels: Okay, now you're just pullin' my pauldrons. I'm a busy guard, I don't have time for this. Can you just go?"

"Farrels: Whatever royal lies here must've loved using decrees! Powerful stuff... But only last for one use. But why hoard 'em? You'll just end up like whoever left these chests here, heh."

When first entering the Card Shack:

"Farrels: Halt! I see you've got a card pack. I've been tasked with explaining the game rules to King of Cards competitors!"
"King Knight: Will that make me king? Doubt it! Let me pass, you plated plebian!"
"Farrels: Have you not heard of the competition? If you defeat the 3 kings, you'll be declared the King of Cards! Do you want to play some cards?"

Accepting to play a game:

"Farrels: You have to be a great strategist to become the King of Cards. Watch how it's done!"
"Farrels: Let's begin! To win, you have to claim more gems than your opponent. To start, pick a card from your hand and put it on the board."
"Farrels: You can't just put a card onto a gem... You have to PUSH IT ON! Using the arrows on your card, push the card you already placed to claim the gem."
"Farrels: Ha, I pushed you off the gem! Just try to push me off again."
"Farrels: Oh, but you see, you can't push there. Trying to push against an opposing arrow won't work! But all is not lost. You can insert your card in between and push only my card off the board!"
"Farrels: Oh no, I'M IN TROUBLE! The game ends when the center squares are full... I can't do anything but place my card in the final square. BAH!"

"Farrels: Hmm. Maybe you're the next King of Cards. Bard can help you with the rest of your quest. Good luck! ...And don't forget...Press [x] to talk to everyone!" 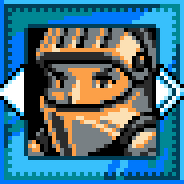 Farrels's Joustus card.
Add a photo to this gallery
Retrieved from "https://shovelknight.fandom.com/wiki/Farrels?oldid=32846"
Community content is available under CC-BY-SA unless otherwise noted.