Fish Head (also known as ????) is a minor character who first appears in Shovel of Hope. He can be seen running through the Armor Outpost, though quickly and rarely.

In King of Cards, a Fairy version of this character, known as the Fairy of ????, can be found in the Fairy Glade. He also has a Joustus card, which calls him Fish Head, confirming his name.

Fish Head wears the same blue Stalwart Plate armor as Shovel Knight. However, he has no helmet, revealing a blue fish head similar to a catfish.

Official artwork of Fish Head from the Kickstarter campaign of Dungeon Duels. 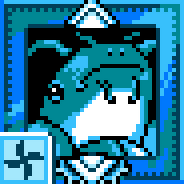 A group of Fish Heads running through the Armor Outpost.
Add a photo to this gallery

Retrieved from "https://shovelknight.fandom.com/wiki/Fish_Head?oldid=37149"
Community content is available under CC-BY-SA unless otherwise noted.