The Fishing Rod is a Relic that the player can purchase from Chester in the Village for 1250 gold. It is one of the first relics available. It allows the player to fish in any pit in the game, including the Troupple Pond. The fishing rod can pull up food, treasure, useless junk or If used in some lava pits even enemies. Due to this, the Fishing Rod can be conveniently used in New Game Plus to improve the otherwise limited supply of healing items.

Sparkling pits yield better rewards including Music Sheets, golden fish that are equivalent to 350 gold, or Troupples, which will grant the Shovel Knight one specific Ichor, if an empty Chalice is avaiable.

To successfully fish press [attack] or [use Relic] when "!!" shows when fishing. The Fishing Rod also does damage when dropped on enemies from above, and can collect treasure, including the bags of money left behind when Shovel Knight dies. It can also dig out a dig pile in one fell swoop like the Trench Blade. 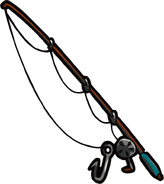 Official Art.
Add a photo to this gallery
Retrieved from "https://shovelknight.fandom.com/wiki/Fishing_Rod?oldid=36002"
Community content is available under CC-BY-SA unless otherwise noted.