Fleetos are minor enemies introduced in Specter of Torment. A variety of Beetos, Fleetos appear as large purple insects jumping fast back and forth. They are encountered in Pridemoor Keep, Memories and Tower of Fate: Entrance.

Like regular Beetos, Fleetos lack any kind of attack, opting instead to damage their foes by directly colliding with them, and are just as easily defeated with one hit. Unlike their red cousins however, Fleetos are much faster, making them much more difficult to dodge or strike. An easy way to get rid of them is to use Curios, such as setting Caltrops in their path. Other differences from the standard Beetos include their inability to be juggled and the fact that they do not drop any kind of treasure upon defeat, instead always releasing a tuft of Darkness when killed by Specter Knight.

One of the Joustus cards in King of Cards, is a Fleeto card which can push other cards up. 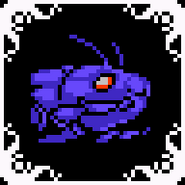 Joustus card portrait.
Add a photo to this gallery
Retrieved from "https://shovelknight.fandom.com/wiki/Fleeto?oldid=24893"
Community content is available under CC-BY-SA unless otherwise noted.