Scholar of the secret technique "the Kiss of Death"

Gall is a character introduced in Specter of Torment encountered in the Tower of Fate. He appears as an undead creature trying to perfect his new killer move.

Gall appears in the dining hall after Specter Knight defeats half of the Order of No Quarter recruits. When spoken to, he demonstrates his new killer move, titled "the Kiss of Death". His first two attempts are unsuccessful and he dies himself as a side effect. Once his move finally succeeds, Gall will reward Specter Knight with 400 gold.

"Gall: Ah, Specter! I'm working on my technique for a new killer move. Brace yourself for... THE KISS OF DEATH!!!"

"Specter Knight: What? Wait just a moment before you do anything rash!"

"Gall: What? It didn't work! I guess I need more training."

If Gall is not successful: Edit

If Gall is successful: Edit

"Gall: YES, IT WORKED! Sorry about that, Specter. I'll find a hero to use it on next time!" 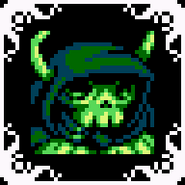 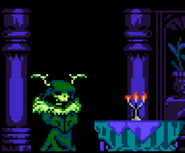 Gall in-game.
Add a photo to this gallery

Retrieved from "https://shovelknight.fandom.com/wiki/Gall?oldid=26172"
Community content is available under CC-BY-SA unless otherwise noted.