Shovel of Hope
Plague of Shadows
King of Cards

Village (Shovel of Hope)
Card Chest: Gatherer's Grove (King of Cards)
The Gastronomer is a minor character in Shovel Knight: Treasure Trove who resides in the Village. He is a chef who can cook meals to improves Health Capacity.

The Gastronomer wears a red and yellow tunic with brown trousers and a red hairband around his forehead. He has a heart tattoo on his right arm. He is cheerful and worries when people turn off a meal. He also speaks in rhymes when he is not disappointed.

In Shovel of Hope, the Gastronomer tends to his kitchen in the Village. He cooks Shovel Knight a meal that increases his maximum health by one for in exchange of Meal Tickets. If multiple tickets are delivered to him at once, he will throw out an equivalent amount of Golden Trays, one at a time.

In the ending, he is joined by the rest of the Village when the Tower of Fate falls and celebrates with them the defeat of the Enchantress.

The Gastronomer appears in the ending of Plague of Shadows with the rest of the Village to rejoice at the destruction of the Tower of Fate.

In King of Cards, the Gastronomer can be found foraging apples at the Gatherer's Grove. He warns King Knight of the Troupple King, then gives him a Troupple King Joustus card.

When talked to without a ticket:

"Gastronomer: Pottage and poultry, mutton and meat! Your maximum health will increase if you eat! Bring a Meal Ticket, I'll whip up a feast! Goatician might have some, now where's that sly beast?"

When talked to with a ticket:

"Gastronomer: A Meal Ticket! Hand it to me! I'll get to work on my best recipe!"

When giving him a ticket:

"Gastronomer: I'll dazzle your palate in no time or less! So bon appetit, and pardon the mess!"

When refusing to give him a ticket or talking to him with a meal served:

"Gastronomer: No appetite? You can't fight on an empty stomach, you know!"

After using up all Meal Tickets:

"Gastronomer: Your max health is full and your hunger is sated! Just look at the strapping strong knight I've created!"

"Gastronomer: Hello, gold one, how are you? Are you here foraging apples too? If so, beware the giant fish! We pilfer them against his wish!"
"King Knight: Oh, we're rhyming now, are we?
...Ahem...
I'm neither here to snack nor snatch; I dare to say he's met a match. No fish or fruit shall stem my tide, for
I
am King Knight!
Step aside!
"
"Gastronomer: Trust me pal, you don't want to anger an immortal ancient like the Troupple King! He looks like this."

"Gastronomer:
Sing a song of sixpence, a pocket full
of rye! Birder eggs and Troupples, bak
ed in
a pie!
" 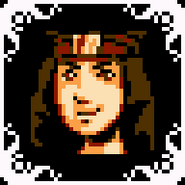 Older version of the Gastronomer's portrait in King of Cards. 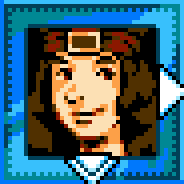 The Gastronomer in-game.
Add a photo to this gallery

Retrieved from "https://shovelknight.fandom.com/wiki/Gastronomer?oldid=32603"
Community content is available under CC-BY-SA unless otherwise noted.