Gatherers are minor characters in Shovel Knight: Treasure Trove. They usually walk around the Village and Armor Outpost.

In Shovel of Hope, Gatherers are walking around the Village and Armor Outpost.

A Gatherer appears in the ending with the rest of the Village, watching the end of the Tower of Fate.

In Plague of Shadows, Gatherers can be found at the Village but are scared off by Plague Knight. One of them flees aboard the Aerial Anvil after Plague Knight's invasion of the Armor outpost.

In the ending again, a Villager is among the crowd watching the Tower of Fate crumbling down.

A Gatherer appears in the ending of Specter of Torment, fleeing from the Armor Outpost upon its attack by the Enchantress and her minions.

Two Gatherers appear in King Knight's toast in the House of Joustus.

"Gatherer: Our old village is overrun with the undead, and Specter Knight! We barely made it out in time!"

"Gatherer: Beware of a lich calling himself the Super Skeleton. His jumping attacks are ferocious!"

"Gatherer: I just love living in a village. It's the best!"

"Gatherer: Please save us from the Enchantress!
Wahhhhhh!
"

"Gatherer: I told the Gastronomer he's outside my delivery area, but did he listen? No!" 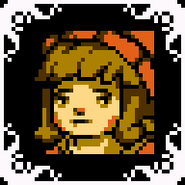 Third alternate color palette.
Add a photo to this gallery

Retrieved from "https://shovelknight.fandom.com/wiki/Gatherer?oldid=31797"
Community content is available under CC-BY-SA unless otherwise noted.