Village (Shovel of Hope)
Tower of Fate (Specter of Torment)

Grandma Swamp is a minor character in Shovel Knight: Treasure Trove. She can be found in each campaign to provide the protagonists their miscellaneous statistics, such as their current playtime.

In Shovel of Hope, Grandma Swamp can be found at the Juice Bar under the Village and will tell Shovel Knight his trivial stats. Shovel Knight mistakes her for a witch.

Grandma Swamp does not appear directly in Plague of Shadows. Instead, she writes Plague Knight letters containing his miscellaneous statistics. They can be read by talking to the Mail Minion at the Potionarium. The minion always concludes that she is probably a witch.

In Specter of Torment, Grandma Swamp appears in the reflection of the Scrying Glass, located in the library above the Magic Mirror room. She tells Specter Knight his statistics, but corrects him angrily when he mistakes her for a magic mirror when expressing his thanks.

In King of Cards, Grandma Swamp can be summoned once King Knight rings the bell on the lower level of the Glidewing. She appears on a flying broom, and tells King Knight his statistics for both his adventure and Joustus career, but, like her other appearances, angrily corrects him once he mistakes her for a witch.

"Grandma Swamp: Double, trouble, soil and shovel. My third eye knows your useless info!
Excavatio!
The number of dig piles you've dug is [x]!
Aurum Infiniosa!
The amount of gold you've collected is [x]!
Thanato Refutatum!
The number of times you've fallen in battle is [x]!
Temporum Perpetua!
The total time you've spent adventuring is [x]:[x]:[x]! I magically see all of your acts, come back again for more useful facts!"
"Shovel Knight: Thanks for helping me, kindly witch!"
"Grandma Swamp:
I'm not a witch!
"

"Scrying Glass: Brine, blight and fires bright. Your feats are laid bare to my all-knowing sight!.
Parapetio Ascensius!
[x] is the number of walls you've scaled!
Morbidum Retrona!
The number of times you've fallen in battle is [x]!
Chronologico!
The total time you've spent adventuring is [x]:[x]:[x]!
Incisum Antecedum!
The number of Dash Slashes you've done is [x]!"
"Specter Knight: Clearly, this is powerful sorcery... Thank you, bewitched mirror."
"Grandma Swamp:
I'm not a a mirror!
"

When King Knight rings the bell on the lower level of the Glidewing:

"Grandma Swamp: As all has been written, let not thy fate wane. For when the bell tolls, thy deeds shall lay plain. What shall I reveal?"

"Grandma Swamp:
Requis mora!
The number of times you've fallen in battle is [x]!
Tempresario!
The total time you've spent adventuring is [x]:[x]:[x]!
Obduratem intrusio!
The number of shoulder bashes you've done is [x]!
Cartediem!
You've found [x]% of the exits!
Aurum infiniosa!
The amount of gold you've collected is [x]!"
"King Knight: Ah! It's nice to meet someone who's a true student of...
me!
How do you keep track of such details, witch?"
"Grandma Swamp: I see and I know all because...
I'm not a witch!
"

"Grandma Swamp:
Joustus!?
Do you think I follow every dilly-dallier while they fritter away time on some silly game?
Well, maybe I do!
Victories: [x] Losses: [x] Draws: [x]
Arbitrum centrus!
You have defeated [x]% of challengers!
Buytria Tabuloso!
[x] is the number of cards you have pushed!
Crystalum Totalus!
You've achieved a Gem Sweep [x] times!"
"King Knight: You've, uh, seen all of my matches? I didn't even notice you there! You must be amazed by my tactics!"
"Grandma Swamp:
Fool!
I've seen all your punishments, humiliations... I see
all.
But I never foresaw
Joustus
taking off. Sometimes you just want to yell out a move to one of the players! Victory slipping away with a single misplaced card! ...Maybe I should pick up a deck one day..." 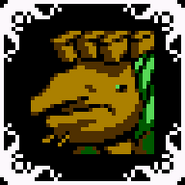 Older version of Grandma Swamp's portrait in King of Cards. 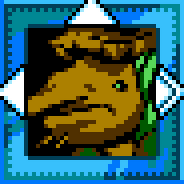 Sprite.
Add a photo to this gallery
Retrieved from "https://shovelknight.fandom.com/wiki/Grandma_Swamp?oldid=33362"
Community content is available under CC-BY-SA unless otherwise noted.