Griffoths are major enemies in Shovel Knight: Treasure Trove. They appear as armored, fire-breathing griffins and can be found in Pridemoor Keep and Tower of Fate: Entrance. Griffoths at Pridemoor are white feathered with golden armor and fur, and blue eyes. They always drop a turkey and treasures when defeated, unless in New Game Plus where the turkey is replaced by a bomb.

Griffoths' armor protect them from ground attacks, leaving only their head as a vulnerable spot. They attack by firing flames in a sinusoidal trajectory, leaving only a few moment to strike them. They also swing their claws whenever their target is close enough. With their eight hit points, it is best to strike twice or three times between each of their fire attacks to avoid damages.

In Specter of Torment and King of Cards, Griffoths will also use their wings to make wind and push Specter Knight and King Knight away or off an edge between two fire attacks.

In King of Cards, King Pridemoor calls them during his battle. The Griffoths fly across the stage, dousing the ground with fireballs. After the battle, King Knight and King Pridemoor are seen riding on two Griffoths.

Black Griffoths only appear in Tower of Fate: Entrance and Warp Wrap Keep. They are red feathered with black armor and fur, and bright green eyes. The only difference with their regular counterpart is that they always drop a bomb instead of a turkey upon death. Hazards are also placed in front of them, making navigating and dodging their fire trickier.

One of the Joustus cards in King of Cards is a Griffoth card which can push other cards up, down, and to the right. 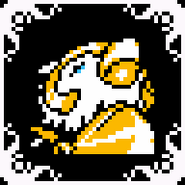 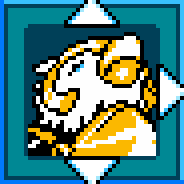 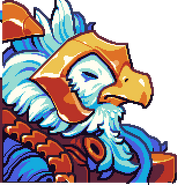 Griffoth idle animation in Pocket Dungeon.
Add a photo to this gallery
Retrieved from "https://shovelknight.fandom.com/wiki/Griffoth?oldid=35607"
Community content is available under CC-BY-SA unless otherwise noted.