Gulper Mages are minor enemies in Shovel Knight: Treasure Trove, appearing mainly in the Iron Whale. They have four hit points and deal half a damage point. They drop 2 red gems worth 50 gold and a jar when defeated. Gulper Mages appear at the Tower of Fate after Specter Knight defeats Treasure Knight.

Gulper Mages always float above a room. They can summon a shield of green whirling orbs before launching them at their target, but leaving their defense open in the process. The anchors present in the Iron Whale can crush them in one hit once the player gets close to the anchors.

"Gulper Mage: My captain's plans are paying dividends! Our sunken riches make us quite a force to be reckoned with, you know." 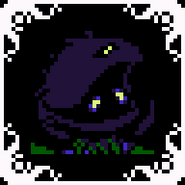 Joustus card portrait.
Add a photo to this gallery

Retrieved from "https://shovelknight.fandom.com/wiki/Gulper_Mage?oldid=24826"
Community content is available under CC-BY-SA unless otherwise noted.