The Hedge Pupil is a minor character in Shovel Knight: Treasure Trove and an acolyte to Plague Knight. He has been tasked with guarding the secret entrance to the Potionarium hidden in his childhood house, in the Village's outskirts. He is brothers with the Hedge Farmer, 'Edge Farmer,[1] and Ledge Farmer.

The Hedge Pupil appears as a humanoid hedgehog wearing glasses and a tainted lab coat.

In Plague of Shadows, Hedge Pupil can be found by his house at the Village's entrance. He is waiting for a locksmith to arrive, which is scheduled for two weeks. Instead of waiting, Plague Knight opts to blow his house up, much to Hedge Pupil's distress.

He is seen again after the fall of the Tower of Fate as one of the people left in charge of the Explodatorium by Plague Knight, along with Percy and the Magicist.

During the ending of Specter of Torment, Specter Knight carries an unconscious Reize and deposits him at the doorstep of the hedgehog brothers' house. The door opens as Specter Knight leaves, with two silhouettes matching Hedge Farmer and Pupil appearing behind.

In King of Cards, Hedge Pupil asks King Knight by the Plains to help him test the Rat Bombardier Heirloom. He sells it to him for 2 Merit Medals. During the ending, he is seen burning all the Joustus cards, along with Plague Knight and Mona.

Before destroying the house:

"Hedge Pupil: Psst... Hey, Plague Knight. I'm still guarding your
secret entrance
, but I lost the key. The locksmith should be here in a week or two. Maybe you could wait until then?"

After destroying the house:

"Hedge Pupil: Well, I guess I'm cancelling the locksmith appointment.
*sigh*
...This was the house I grew up in..."

When returning to the village:

"Hedge Pupil: So many memories... Maybe one day I'll restore my childhood home. "

At the beginning of the Rat Bombardier Course:

"Hedge Pupil: Psst... Over here. Sire! It's me! Thanks for dropping by for the test. I finished up our...
secret device.
But the materials aren't free, remember. I need Merit Medals to pay our suppliers."

"Hedge Pupil: King Knight, we have to pay our delivery bill. I already did all the design work, so you need to contribute!"

After buying the Heirloom:

"Hedge Pupil: The design of my safety bomb shields the rats from damage! Can you reach the far end of the course? And by the way... Don't Shoulder Bash in this cave. ...There are still a few kinks in the motion sensors. Could end badly."

At the end of the stage:

"Hedge Pupil: The Rat Bombardier worked! Thanks to your field tests, King Knight, we'll be ready for production in no time!"
"King Knight: Yes, splendid! Why not come aboard my royal airship, then, and enjoy a well-deserved glimpse of my domain?"
"Hedge Pupil: After all this research, I could sure use some fresh air. Lead the way, sire!"

When first spoken to at the Glidewing:

"Hedge Pupil: Look who was up here! My brother! We're reunited! And what a lovely ride, sire. Oh, and it looks like my Joustus cards will come in handy!"

When spoken after that:

"Hedge Pupil: Fancy a quick round of Joustus, sire?"

"Hedge Pupil: Hey! Don't forget, I devised the Rat Bombardier! I possess a keen tactical mind. Really, I do!" 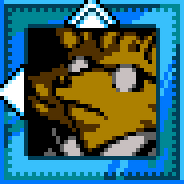 The ruins of Hedge Pupil's house.
Add a photo to this gallery

Retrieved from "https://shovelknight.fandom.com/wiki/Hedge_Pupil?oldid=36332"
Community content is available under CC-BY-SA unless otherwise noted.