Hermittacks are minor enemies that crawl slowly along any surface (including walls and ceilings). The red and purple ones retreat into their shells when hit with a weapon, then can be knocked around the screen. They deal half a damage point, along with their metal variant.

This type is not immortal, however. Specter Knight can destroy them with a single swing of Dread Talon. 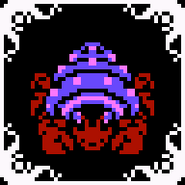 Metal Hermittack in-game.
Add a photo to this gallery
Retrieved from "https://shovelknight.fandom.com/wiki/Hermittack?oldid=24910"
Community content is available under CC-BY-SA unless otherwise noted.