Hoop Kid is a minor character in Shovel of Hope and King of Cards. She plays around in the Village with a hoop and a stick.

The Hoop Kid is a young girl who wears a red dress and shoes with black hair. She can be seen hoop rolling with a stick and hoop.

Playing Kid and Hoop Kid are good friends with similar hobbies[1] and are seen together many times. In Shovel of Hope, they are both seen playing in the same spot of the Village and at the ending they are playing with Tinker Knight's toy together.

Hoop Kid seems to admire Cooper, as her dream is also to pilot an airship. When King Knight disrespect the Glidewing's captain, she gets angry and tries to defend him, showing her respect.

The Hoop Kid can be found in the Village, past the shops. Shovel Knight will bounce if he Shovel Drops on her hoop. If he hits her hoop with a charged Shovel Slash (either via the Charge Handle ability or the Dynamo Mail), it will fly off the screen. The Hoop Kid will then stop playing, puzzled.

She reappears in the ending at the Clockwork Tower along with the Playing Kid, waiting for Tinker Knight to finish building an automated toy replica of his tank with the help of the Shovel Smith and the Armorer. Once the toy is built, she runs after it.

In King of Cards, the Hoop Kid can be found standing atop the House of Joustus's roof, where she gives King Knight a Cooper card.

When talked to while playing:

When talked to after launching off her hoop:

"Hoop Kid: You found my secret lookout. Great view, huh? I've always wanted to ride in an airship. It's my dream!"
"King Knight: That sounds dumb! Whizzing about in a giant floating target!"
"Hoop Kid: Hey, it is not! The Glidewing's captain can dodge any threat. He's even got his own card! Here, have one."

"Hoop Kid:
Here, in the moonlight air.. There, in
the evening breeze.. We're neither
here nor there... They're in the cloud
and trees!
" 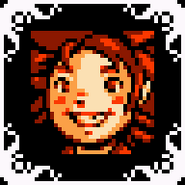 Older version of the Hoop Kid's portrait in King of Cards. 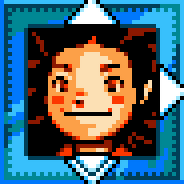 Upset Hoop Kid without the hoop.
Add a photo to this gallery

Retrieved from "https://shovelknight.fandom.com/wiki/Hoop_Kid?oldid=36161"
Community content is available under CC-BY-SA unless otherwise noted.