Tower of Joustus (King of Cards)

Horace is a character in Specter of Torment and King of Cards. In the former game, he offers Specter Knight the option to play a minigame with him; in the latter game, he is a Joustus champion that King Knight must beat.

Horace is a large suit of armor that may or may not be headless. He is found sitting on a bench equipped with a lantern that creates an electric barrier, as well as confetti for those who beat his trial.

In Specter of Torment, Horace can be found to the left of the rail section, where 'Edge Farmer is located. In King of Cards, he can be found on the balcony to the right of the room where the Liquid Samurai is located.

In the minigame, Specter Knight has to climb to the top of a room before an electric barrier touches him. If he falls below the bottom of the screen, runs out of health or touches the barrier, the minigame ends immediately. The level layout is randomly "scrambled", meaning the order in which the level parts appear doesn't follow a specific pattern.

Unlike the Mona's Potion Juggle mini-game, the player is not required to pay any fee in order to play this mini-game.

Reaching the top awards the player with 1700 gold. If the minigame was completed before in the same file, only 200 gold is given. No money is lost if Specter Knight dies in the middle of the minigame; the only thing that happens is that Horace congratulates the knight, but tells him that his efforts were not enough.

As the level order is randomly generated, it is best to run the mini-game multiple times to get used to the stage layouts. Aside from the obstacles, various enemies can be encountered, such as Blorbs, Boneclangs, Divedrakes, Wizzems, Goldarmors, and Floatsomes.

While it is not required, having the Judgment Rush Curio and Rail Mail are recommended in order to increase Specter Knight's mobility, allowing him to pass through corridors and enemies faster. The Chronos Coin is also useful to slow down Horace and the electric barrier. However, using Curios should be done sparingly, as there aren't many sources of Darkness to be found, although some specific points will have large Darkness Jars, and any enemy left behind will perish and automatically award a small jar of Darkness to Specter Knight.

"Horace: Ah. Welcome. Few visit the Endless Parapet, but for the brave I offer a brief diversion of my own design. As if the Enchantress has the time for diversions! I've been here for longer than she. I merely reward the odd seeker of thrills, and none harm me. Care to play my game? If you fare well, there may be a reward."

"Horace: Ah. I bid you a pleasant journey, then. Here my games and I shall sit."

"Horace: Ah. Then we shall begin. Please board the platform."

When failing the game:

"Horace: You performed admirably, but the goal remains elusive. Perhaps you'd like to try again sometime."

When completing the game:

"Horace: I am impressed, you have bested my challenge. Well done.." 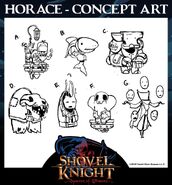 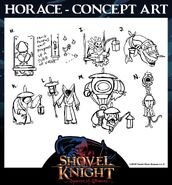 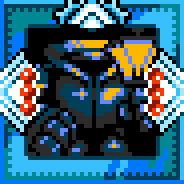 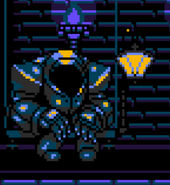 Horace in-game.
Add a photo to this gallery
Retrieved from "https://shovelknight.fandom.com/wiki/Horace?oldid=37117"
Community content is available under CC-BY-SA unless otherwise noted.