Start a Wiki
watch 02:38
The Loop (Games)
Do you like this video?
Hoverhafts are powerful floating minor enemies in Shovel Knight: Treasure Trove. They are encountered in the Flying Machine. In Specter of Torment after Propeller Knight's defeat, one Hoverhaft appears as a wandering NPC and another one appears attending Creech's bar.

Hoverhafts have four hit points and can attack with swipes and charges whilst floating making them tricky enemies.

Hoverhafts have four hit points and can attack with swipes and charges whilst floating making them tricky enemies.

Pilot Hoverhafts (conjectural name) are Hoverhafts piloting ships that appear in Specter of Torment, King of Cards, and Showdown. They don't do any harm and can be used as platforms.

One of the Joustus cards in King of Cards is a Hoverhaft card which has 1 Double Arrow facing right. It's also a Cascade card.

After completing the Flying Machine:

"Hoverhaft: You can attack quite quickly, my fleet friend. Being aggressive must be in your favor!"

At the Crag of Joustus:

"Hoverhaft: Cascade Cards flip the cards they push to become your color. Be careful, or you'll get blown over, too!"

A Hoverhaft with various other enemies. 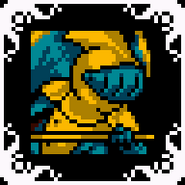 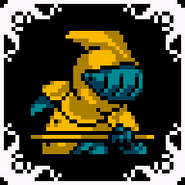 Older version of Hoverhaft's portrait in King of Cards. 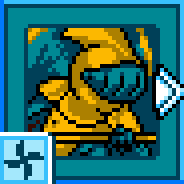 Hoverhaft's Joustus card.
Add a photo to this gallery
Retrieved from "https://shovelknight.fandom.com/wiki/Hoverhaft?oldid=35649"
Community content is available under CC-BY-SA unless otherwise noted.