Start a Wiki
watch 02:38
The Loop (Games)
Do you like this video?
Hurlsvelgr is a mini-boss on the Stranded Ship appearing only in Specter of Torment. It is a large blue rainbow-spitting bird.

Hurlsvelgr flies from either the left or right of the screen and has two attack patterns. It either charges across the screen, or hangs back to spit rainbow projectiles at Specter Knight. The bottom half of his body is armored, so he can only be struck from above by taking advantage of the nearby lanterns. When hit, Hurlsvelgr gets knocked back and vomits a rainbow which create a solid platform to land on and strike it a few more times before he flies away. It deals one full damage point and has 12 hit points.

One of the Joustus cards in King of Cards is a Hurlsvelgr card which has 2 Double Arrows facing left and down. It's also a Cascade card. 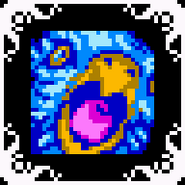 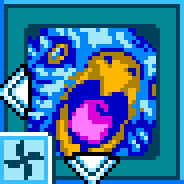 Flying animation.
Add a photo to this gallery
Retrieved from "https://shovelknight.fandom.com/wiki/Hurlsvelgr?oldid=36186"
Community content is available under CC-BY-SA unless otherwise noted.