Invisishades, also called Ghosts, are minor enemies in Shovel Knight: Treasure Trove. Their most notable trait is that they are completely immune to any attacks; if a characters tries to attack one, it is simply stunned and phases, rendering it unable to be harmed and unable to harm the character. They are sometimes spawned if a gravestone is destroyed. Invisishades are the main enemies in the Hall of Champions, where they can be permanently destroyed using the Light Orbs.

In Specter of Torment, One Invisishade appears in the Tower of Fate after beating The Lich Yard. Oddly, this Invisishade is referred to as "Ghost" when spoken to.

The Invisishade's Joustus card is #6 with one arrow pointing both upwards and to the left.

"Ghost: Wow, I sure do love being dead! Thanks, Specter Knight!"

"Ghost: I wish I could hold Joustus cards. I wonder if I could get some kind of corporeal prosthetic." 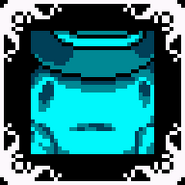 Joustus card portrait.
Add a photo to this gallery
Retrieved from "https://shovelknight.fandom.com/wiki/Invisishade?oldid=28660"
Community content is available under CC-BY-SA unless otherwise noted.