Shovel of Hope
King of Cards

In Shovel of Hope, the Juice Maid can be found at the Juice Bar in the village. She greets Shovel Knight when talked to, explaining she admits everyone in her establishment.

King Knight can find the Juice Maid on the right side of the first floor of the House of Joustus. When King Knight speaks to her, he demands a goblet of her finest juice and proclaims he is the future King of Cards. She responds by saying she would expect him to buy a round of juice for the entire house with his gleaming outfit, to which he can agree to. If he agrees, the House's patrons will gather around and toast to him as the Horns of Heralding, which he will then receive, play in celebration. However, if he declines to pay the

5,000 fee to buy the round, she will insult him and criticize his claims of being a king.

During the ending, a Juice Maid dressed in blue is seen in the Homestead, bringing tea to those betrayed by King Knight. It is not known if this is the same Juice Maid from the Village and House of Joustus.

When Shovel Knight speaks to her in the Village:

When King Knight first speaks to her in the House of Joustus:

"King Knight: Bar-hop! I'll have a generous goblet of your finest juice!
To me,
the future King of Cards!"

"Juice Maid: Future king, you say? With your gleaming getup, I'd half expect you to toast the entire house with a round!"

"King Knight: Yes indeed, juice on the house, the finest for everyone! To a new era of my triumph!"

"Juice Maid: Incredible! Generous goblets for everyone, on behalf of our new philanthropist! A fee of 5000 gold will of course be required for the consideration, sir..."

"Juice Maid: Be still my heart! We have a new patron! To King Knight, three cheers for the king of this house!"

"Juice Maid: High roller? Heh! More like
eye-roller!
You're all the same. Noble intentions, but no coin. It would appear to me that you're the king... of disappointment!"

If talked to again after paying the fee:

"Juice Maid: King Knight, you know, I don't care what they say about you. You're welcome here any time." 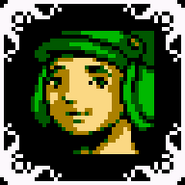 Older version of the Juice Maid's portrait in King of Cards.

Older version of the Juice Maid's portrait in King of Cards. 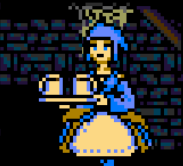 The blue Juice Maid.
Add a photo to this gallery

Retrieved from "https://shovelknight.fandom.com/wiki/Juice_Maid?oldid=33856"
Community content is available under CC-BY-SA unless otherwise noted.