King Knight is one of eight Knights of the Order of No Quarter who serves the Enchantress. He rules over Pridemoor Keep.

Similarly to the currently playable campaigns for Plague Knight and Specter Knight, King Knight will have a "playable boss campaign"[1] added in King of Cards.

As one of the first members of The Order the player can face, King Knight is a fairly simple boss. He moves slowly and in a flashy prideful manner befitting of his personality. His main method of attack is to hop around the stage before executing a paralyzing stomp (if the player is on the ground, they will be stunned for a short time). Should the player fall prey to his attack, King Knight will slowly walk over to them and then strike with his scepter.

King Knight also uses a slashing charge which makes him quickly move in a straight line through the screen. After depleting approximately half his health, he will move into a corner and two horns will launch confetti into the air. While this is a good time to deal damage to him, the confetti will inflict damage to the player as it falls slowly to the ground.

In Specter of Torment

King Knight's stomp will change the floor levels so that the ground is no longer flat with some of the flooring being replaced with pits. He may also move in the air with help of Propeller Rats, leaving him briefly vulnerable, but also moving away from Specter Knight's reach.

His confetti is replaced with playing cards that can be Dash Slashed, each moving in a direction indicated by a corresponding arrow beside each card. He usually uses the Propeller Rats when the player knocks him into a pit he created, but he will also drop cards below him at both sides while hanging onto the rats.

As a playable character

Similarly to Plague Knight in Plague of Shadows and Specter Knight in Specter of Torment, King Knight receives a new sprite set in King of Cards that makes him slightly smaller (almost the same size of Shovel Knight) and with unique animations for walking, jumping, climbing, among others. Unlike Plague Knight and Specter Knight, however, King Knight did not receive much modification in his design.

King Knight can attack by dashing toward enemies with a move called the Shoulder Bash, which he can execute also while airborne. Hitting an enemy, a rough wall, or any object this way will send him into a twirl in which he can bounce off enemies and destroy dirt blocks like the Shovel Drop, however, this action seems to not be manually controlled.

His life meter is in the form of red hearts. He can also pick up hearts when damaging enemies, which recover health. He uses another form of relics, this time called Heirlooms. King Knight's magic, called Vigor, is numerical as opposed to a meter. Like the previous two campaigns, this one features another unique kind of currency.

"King Knight: An interloper is in our midst! Begone from our throne room, knave!"

"Shovel Knight: I'm no more an intruder than you! You aren't even a real king!"

"King Knight: Oh, but you're mistaken. The Enchantress saw me for my fabulously regal self, and now all bow before me!"

"King Knight: Oh, this lavish lifestyle is in my blood, peon! Bask in the glimmering grace... of a true monarch! As the embodiment of opulence, I demand tribute!"

"Plague Knight:
Aaaa-ha-ha
, let's have that essence. I think I'll take that nice crown, too!"

"King Knight: Oh, look, it's the loyal lapdog. Here to do your master's bidding,
hmmm
? Chasing your tail around the valley must be tiring. In fact, you look like death!
Ha ha!
"

"Specter Knight: As our leader suspected, you dawdle and play at nobility. I've been tasked with setting you back on schedule."

"King Knight: What should I do, grab a shovel and start digging? Just thinking about it makes my flawless face flush! Working is for commoners! But I'm not afraid to get my hands dirty.
Watch!
"

At the Tower of Fate's banquet:

"King Knight: Ah, look, the sniveling servant, here to wait on me. Hey, you! Servant! Yes, you! More chickens at once!
Ha ha ha! Glamourous!
" 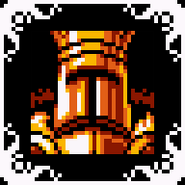 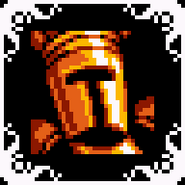 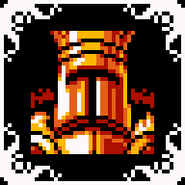 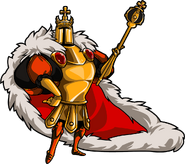 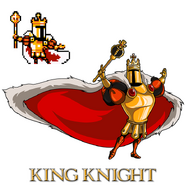 Flying with the Bubble Frog. 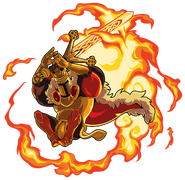 Striking with the Scorching Saber.

Playing the Horns of Heralding.

King Knight's movement example.
Add a photo to this gallery

Retrieved from "https://shovelknight.fandom.com/wiki/King_Knight?oldid=25301"
Community content is available under CC-BY-SA unless otherwise noted.