King of the Pridemoor Kingdom

King Pridemoor (commonly referred to as simply Pridemoor), known as Deposed King in Shovel Of Hope, is a recurring character in Shovel Knight: Treasure Trove. He is the rightful ruler of Pridemoor Keep, but was deposed by King Knight.

In his normal appearance, the Deposed King has a Tudor-era beard and hairstyle. He wears gold colored clothes and a red and white monarch cape. He looks pitiful without his throne but joyful once regained. He also wears a large golden mechanical suit when battling in King of Cards.

As the first Joustus Judge, King Pridemoor is a shining example of Kingliness. A disciplined leader, strategist, and combatant, he’s also a formidable blacksmith.[1] He is also both an undefeated Joustus player and an expert in single combat. Yet, the king lost all composure after his defeat at the hands of King Knight.

When King Pridemoor first reached King Knight, he was very welcoming and nice to him. When King Knight discovered his mother was in love with him, his attitude towards Pridemoor quickly changed to hate. After King Knight's betrayal at the end of the King of Cards campaign, Pridemoor now exhibits hate towards him.

Before King Knight even started his quest to become King of Cards, his mother was already an avid fan of King Pridemoor. After entering the Glidewing, they both quickly developed a love interest for each other and constantly exchanged flirting, what disgusted King Knight.

In Shovel of Hope, the Deposed King can be found at the Juice Bar in the Village without his crown, crying over the loss of his kingdom to King Knight. When King Knight is defeated, he rejoices and is impatient to reunite with his two Griffoths. He is also quite amused by the Mobile Gear if Shovel Knight uses it in front of him. At the conclusion of the story, the Deposed King is back on the throne of Pridemoor Keep, wearing a crown and forcing King Knight to clean the throne room as punishment.

In Plague of Shadows, the Deposed King only appears at the end of the story, back on his throne with King Knight cleaning the floor. In this story however, the Deposed King jumps down his throne and honors Plague Knight for the defeat of the Enchantress, with Mona observing the ceremony. Plague Knight knocks over his crown by jumping up and down, but the king doesn't mind and keep on applauding him.

In the ending of Specter of Torment, King Knight is still sitting on the throne of Pridemoor while gold Wizzem turn the castle's walls into gold. The Deposed King is scrubbing the floors of the throne room with a broom, similar to the punishment he will inflict upon King Knight after the defeat of the Enchantress.

Note: This is King Pridemoor's deck from Challenge Mode. He can't be challenged in the normal campaign.

"King Pridemoor: Oh, I wasn't expecting a visitor! Welcome... to Pridemoor Keep! What brings you here?"
"King Knight: I wish to rule a castle as grand as this one someday... Well, actually much grander than this!"
"King Pridemoor: You have much to learn before you can become a king! Let's test your tactics!" 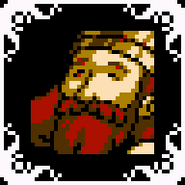 Older version of King Pridemoor's portrait in King of Cards. 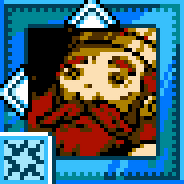 King Pridemoor's idle animation after his defeat in King of Cards.

Retrieved from "https://shovelknight.fandom.com/wiki/King_Pridemoor?oldid=37665"
Community content is available under CC-BY-SA unless otherwise noted.