Knights are minor recurring characters in Shovel Knight: Treasure Trove. They are usually seen passing through the Village and Armor Outpost. They are also fought as enemies in the Outpost and the Hall of Champions in Plague of Shadows, where they are minor enemies who come in three different variant with their own fighting styles.

Knights wear a classic medieval set of armor complete with a helmet with a feather on top, and carry a normal sword. When in combat, they always have their visors up, but close it when just wandering around. Specific knight characters such as Farrels, Wallace, and the Head Guard are always seen with their visor up.

Unlike regular enemies, Knights are knocked down and fall off the screen much like Goldomes. They also only drop Jars.

In Shovel of Hope, Knights can be found passing through the Village and the Armor Outpost. They gladly chat with Shovel Knight, although a number of them will mock his Shovel Blade. One Knight also appears at the StreetPass Arena in the Nintendo 3DS version.

In Plague of Shadows, Knights can be briefly seen in the Village, before they flee at the sight of Plague Knight. In the Armor Outpost, however, some knights flee after Plague Knight crashes down, but a group of them attack him, forcing the alchemist to retaliate. A knight manages to escape aboard the Aerial Anvil.

The Head Guard also lures Plague Knight inside the Hall of Champions. He locks the alchemist inside, and a set number of knights for each room of the building assault him. After the knights' defeat, Plague Knight can return and pay a fee to fight again the guards, this time as a training rather than an ambush.

In Specter of Torment, the Knights are briefly seen in the ending, desperately trying to defend the Armor Outpost from an attack by the Enchantress's forces, with herself joining the chaos.

Enemy Knights are an enemy version of the Knight NPCs. They are fought in both the Armor Outpost and the Hall of Champions in Plague of Shadows. In the Armor Outpost, the Knights surrounds Plague Knight, attacking him in waves until they are all defeated. In the Hall of Champions, under the command of the Head Guard, they lock the alchemist inside, and a set number of them for each room of the building to assault him.

Upon defeat, they only get knocked away and do not drop anything except the occasional Jar.

All Knight variants only deal one hit point of damage, but their health and diversity of attack moves increase with each upper level.

Iron Knights share the same grey color palette as Farrels and the Head Guard. They have two hit points and only attack by jumping forward and striking at their opponent. They move slowly back and forth, but can also jump back to avoid explosions. This makes their attacks unpredictable, tougher enemies than Goldarmor.

Bronze Knights share the same bronze color palette as Wallace. They have three hit points and, in addition to the short jump attack, they can also perform a powerful downward charged sweep. This gives them the upper hand in horizontal fights, and makes them hard to hit at a distance.

An iron and black armor Knight walking in the Village:

"Knight:
Bwahaha
, get a real weapon!"

A bronze armor Knight walking in the Village:

"Knight: Make sure to press [x] to talk to people, like you did just now!"

An iron and black armor Knight walking in the Armor Outpost:

"Knight: I saved 3 maidens this morning, what did you do?"

An iron and purple armor Knight walking in the Armor Outpost:

"Knight: Once I beat an area's leader, I can return to get the stuff I missed before. That makes it easy!"

A silver and red armor Knight walking in the Armor Outpost:

An iron and black armor Knight at the StreetPass Arena:

"Knight: StreetPass Arena is too random for me. Once I record my ghost, I'm just going to enjoy meeting other adventurers!"

After being catapulted in the Armor Outpost:

"Knight: It's Plague Knight! Now's our chance!
Everyone get him!
"
"Plague Knight: Ugh, Percy couldn't hit the broad side of a barn!"
"Knight: You're cornered! Lay down your chemical weapons, and come quietly!"
" Plague Knight:
Hee? hee? hee!
Quiet, he says! Total science!
Boom! Aaaaa-Hahaha!!
"

A silver and red armor Knight at the Cavern of Joustus:

"Knight: ..Well, maybe I
did
abandon my post.. But who cares! I've got Joustus fever!" 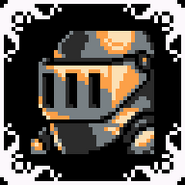 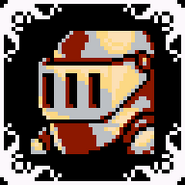 A silver and red Knight's portrait. 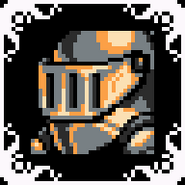 Older version of Knight's portrait in King of Cards.

Enemy Knight, unused color palette.
Add a photo to this gallery
Retrieved from "https://shovelknight.fandom.com/wiki/Knight?oldid=35576"
Community content is available under CC-BY-SA unless otherwise noted.