Ledge Farmer is a minor character in Shovel Knight: King of Cards. He is brothers with Hedge Farmer, Hedge Pupil, and 'Edge Farmer.

The Ledge Farmer is a bipedal anthropomorphic hedgehog, similar to the Hedge Farmer, Hedge Pupil, and 'Edge Farmer. He wears a purple outfit and aviator helmet, along with a wingsuit attached to his back.

When King Knight first attempts to use the Rat Rope outside of the House of Joustus, Cooper and the Bard approach him offering him a partnership to claim the Joustus crown. King Knight accepts, and the three use the rat rope that leads them aboard the Glidewing, Cooper's airship. After Cooper welcomes King Knight, he can climb to the upper levels of the Glidewing, where he'll find the Ledge Farmer on a deck to the left.

When King Knight approaches him, the Ledge Farmer says he got a wingsuit but he is too scared to jump off the ledge to test it out. Instead, he insists on waiting to build the courage to do it. King Knight can bash him off the ledge, after which he will fly back on board, successfully proving the wingsuit's function. He will give King Knight 2 pink gems when talked to again the first time.

If King Knight is wearing the Battery Brigandine armor, he is able to use a charged Shoulder Bash. Using this bash on the Ledge Farmer sends him flying off without his wingsuit. 2 pink gems are dropped and Ledge Farmer is no longer seen in the room if the King Knight reenters it. But he reappears if King Knight leaves the Glidewing and then returns.

When King Knight first speaks to him aboard the Glidewing:

"Ledge Farmer: So, I got this wingsuit? And it's great? But... I'm scared too. Maybe I'll just stay here for a while longer? Work up some steam..."

When at the Edge of the Room:

"Ledge Farmer: King Knight! You had enough confidence in me that you'd push me to my doom? Thank you! I just needed help taking the plunge." 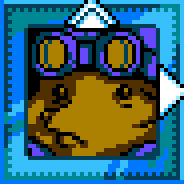 Ledge Farmer's Joustus card.
Add a photo to this gallery
Retrieved from "https://shovelknight.fandom.com/wiki/Ledge_Farmer?oldid=36060"
Community content is available under CC-BY-SA unless otherwise noted.