Legion is a character in Specter of Torment encountered at the Tower of Fate. They upgrade Specter Knight's Curios for a price of 4000 gold each.

Legion, nearly identical to Manny, is an amalgamation of many small creatures infesting a cloak and holding up a blue head. It wears a green cloak with blue trimming on almost all seams and the sleeves. Legion's chest opens up to reveal more tiny creatures.

"Specter Knight: These creatures are gathering around a vessel marked with Curios. Perhaps I'll make an offering. Offer 1000 gold?"

"Specter Knight: A waste of time, and of coin!"

"Specter Knight: The vessel can hold far more than this pittance.... but it's a start."

"Specter Knight: The vessel is nearly full. We'll see where this leads."

If Specter Knight doesn't have any Curio to upgrade:

If Specter Knight has any Curio:

If not enough gold:

After purchasing all Curio upgrades:

"Legion:
Stroooong!
Miiighty! You be strong like weee be Legion!" 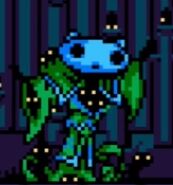 Legion in-game.
Add a photo to this gallery
Retrieved from "https://shovelknight.fandom.com/wiki/Legion?oldid=37360"
Community content is available under CC-BY-SA unless otherwise noted.