Leo is a minor character in Shovel Knight: Treasure Trove. While interested in fancy clothing, he is also a skilled player of Joustus.

Leo wears an elegant blue attire and vest, and has blue hair and eyes. He has an arrogant look.

In Shovel of Hope, Leo can be seen inside the Fancy Shop in the Armor Outpost. He is seen wanting to buy something, but claims he is only 1000 gold short for the purchase. He asks Shovel Knight if he can loan him the needed money. When Shovel Knight pays, Leo purchases the item and leaves the outpost. He later returns after the commotion with Mr. Hat and wonders what happened.

Leo reappears in Pridemoor Keep in the ending, among the reformed court of King Pridemoor.

In Plague of Shadows, Leo can be seen in the Fancy Shop. He flees with the rest of the townsfolk when Plague Knight attacks the Armor Outpost, and boards the Aerial Anvil during his escape.

In the ending of Specter of Torment, Leo can be seen fleeing from the Fancy Shop as the forces of the Enchantress attack the Armor Outpost.

In King of Cards, is one of the Joustus players at the Crag of Joustus. King Knight has to defeat him in order to move on through the competition.

When refusing to lend him money

When lending him money:

"Leo: Excelsior! Now that I have my purchase, I shall take my leave!"

"Leo: I thought I saw some commotion in here from outside. What happened?"

"Leo: I heard there is a fancy shop nearby, but where is it? I can't be sartorially superior if I'm not clad in couture. Speaking of superiority.. care to play Joustus? I'm quite good."

"Leo: Let's enjoy a round or two, before I continue pacing about this cabin, unimpressed." 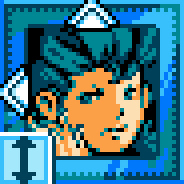 Retrieved from "https://shovelknight.fandom.com/wiki/Leo?oldid=32750"
Community content is available under CC-BY-SA unless otherwise noted.