Memories
Luan is a supporting character in Specter of Torment, appearing only during Specter Knight's memories of his mortal life, when he was known then as Donovan. He was Donovan's thief companion, and Reize's father.

Luan has wild black hair, a black beard, and a red headband to go along with it. He wears a red outfit, with small plates of golden armor, and has a large, bandaged sword.

Luan is shown to be very caring of Donovan and Reize, and prefers to avoid unnecessary fights who may result in harm to his friends. According to himself, in his youth Luan was reckless, brash and naive. This resulted in many near death experiences who he, in a later age, would end up regretting.

In the Memory Stages Luan helps Donovan progress through the Tower of Fate by acting similar to a Lantern, which serve as a stationary object that Specter Knight/Donovan can Dash Slash through.

Before the time of the Enchantress and her Order of No Quarter, Luan and Donovan roamed the lands as adventuring partners. Luan became known for his combat mastery and daredevil antics as he strove for rarer and more magical artifacts.[1]

At some point, Donovan convinced Luan that the Amulet, a powerful artifact contained within the Tower of Fate, had the power to protect his son from all harms. They ascend the tower together, helping each other to progress through its obstacles and the creatures guarding it. While camping midway, Luan expresses his doubts towards their quest and his worries about his son. Donovan reassures him on the upcoming success of their objective.

It takes them two days to reach the Tower's pinnacle. When finally approaching the Amulet, Shield Knight appears to stop them. The knight claims that the dark power contained within the Amulet is too powerful to be used and must to be destroyed. Luan starts to believe her, but Donovan doesn't trust the knight and draws his sword at her. Shield Knight engages him in a fight while Luan only observes, disapproving of this outcome.

After the fight, the Tower starts to crumble. Luan pleads his friend to forget the Amulet and leave to save their lives. Donovan mocks him and is eventually angered by his insistence, perceived as cowardice. He lashes at him to make him stand back, but the floor collapses under them both. While Donovan still kept some breath after the fall, it proved fatal to Luan, which will haunt Donovan for the rest of his existence.[2]

"Donovan: Indeed. And a long journey it's been. Onward!"

"Luan: What say we stop here for the night?"

"Luan:
*sigh*
Donovan... As a father, I'm worried about him. Do you think the Amulet will truly protect him from all harm?"

"Donovan: Your boy has much to learn about the world, certainly, but... If this trinket is as powerful as they say..."

"Donovan: Don't worry. We won't be leaving empty handed. Come now, let's rest, and tomorrow we will find out for ourselves."

"Luan: Let's break camp. We can reach the pinnacle by day's end!"

"Donovan: I can already sense its power... over life and death. It shall be ours soon."

If Donovan did not pick the Caltrops in the previous flashback:

"Luan: These Caltrops.. a fine weapon, perhaps they'd be useful in our escape."

"Donovan: I am scarcely interested in scavenged scrap metal, but if you think they have a use, then so be it."

Before the fight with Shield Knight:

"Donovan: It's ours! Finally!"

"Shield Knight: Stay where you are! That amulet has powers far beyond your control! I am here to destroy it, once and for all!"

"Luan: But... I seek only to protect my son! My intentions are pure!"

"Shield Knight: Protect him, then, by fleeing this place and never looking back!"

"Donovan: ...Heh. You want it for yourself. You can't fool me. Luan, would you do the honors?"

"Luan: Just a moment! If what she's saying is true, then... Might we be a bit more cautious?"

"Donovan: You would let some pompous knight tell us what we can and can't take? Who is this busybody anyway?"

"Luan: Donovan! The tower crumbles around us! We must leave at once!"

"Donovan: I never knew you as a coward, Luan! We'll leave once we have our prize!"

"Shield Knight:
Stay away!
You meddle with forces you do not understand!"

"Luan: Please, Donovan,
I'm beggingyou!
Leave the Amulet, it's not worth it!"

"Donovan:
Ha ha ha!
And you simply made off with his boots?
Incredible!
That's one way to make a grand escape."

"Luan: I was reckless in my youth. Much like my own son.... Brash, naive.. It's a wonder I've lived to tell such tales."

"Donovan: Nonsense! We two shall prosper for a hundred years! And your boy takes after his father."

"Donovan: Is this a locket?"

"Luan: If fate should claim me before my time, he'll have no one to protect him from his own flights of fancy."

"Luan: This is an old family keepsake. You are family to me, and... I would hope you'd be family to Reize."

"Donovan: Luan... I would lay down my life to save his. I promise." 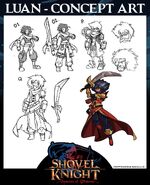 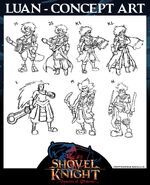 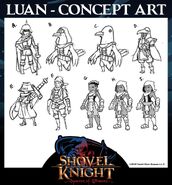 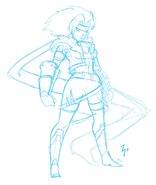 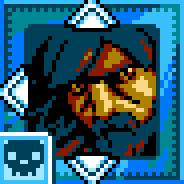 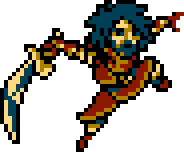 Luan's sprite with his sword.

Luan's sprite with the "NO&SEPIA" cheat code.
Add a photo to this gallery

Retrieved from "https://shovelknight.fandom.com/wiki/Luan?oldid=36124"
Community content is available under CC-BY-SA unless otherwise noted.