Lunks appear as a stout bald man with a long, dark beard. They wear a blue and yellow vest with pants and have green tattoos covering their body.

King Knight can find Lunks walking around the House of Joustus. When spoken to, they ridicule King Knight's goal to take the Joustus crown and become a king.

Lunk at the House of Joustus:

A gray clothed Lunk with light skin at the Cavern of Joustus:

A dark clothed Lunk with gray skin at the Tower of Joustus: 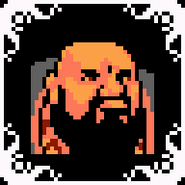 Lunk's portrait with a gray shirt. 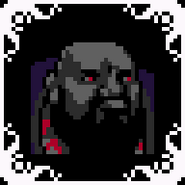 Lunk's portrait with gray skin.
Add a photo to this gallery
Retrieved from "https://shovelknight.fandom.com/wiki/Lunk?oldid=32788"
Community content is available under CC-BY-SA unless otherwise noted.