Madam Meeber is a character of Shovel Knight: Treasure Trove, normally exclusive to the Nintendo game versions (Wii U, 3DS, and Nintendo Switch), appearing in all four campaigns.

She can scan an amiibo and summon a fairy companion who will follow the protagonists throughout their campaigns.

She also has an extended role in King of Cards, as a secret for the player to find no matter the game version. This secret can only be accessed after fighting Mr. Hat and getting his shop on the Glidewing.

Four different fairies can be summoned in Shovel Knight: Treasure Trove; each one represents a protagonist from one of the four campaigns and is unlocked by its respective amiibo:

Unlike the Fairy enemies, these fairies are harmless. They follow their knights and interact with the world around them in various ways, like trying to lift treasures, poking at enemies ineffectually, and mourning fallen knights.

Additionally, each fairy has extra unique interactions with the characters and the world around them. For example, the Fairy of Alchemy in particular can get stuck inside Mona's Dynamo Decanter while she's processing an Essence.

Furthermore, in Plague of Shadows, Specter of Torment, and King of Cards, when scanning the associated amiibo, Madam Meeber will also tell you that the fairy comes with its own special set of armor. These costumes are strictly cosmetic, only changing the set of clothes the character is wearing, the dialogue portraits, and the sprites on the Valley map. Any protective Gear they are wearing will stack up on top of the costume, changing it's proprieties according to the ones of the Gear. The costumes can be removed simply by asking Madam Meeber to do so. The fairy costumes are as follows:

These costumes can also be unlocked in Shovel Knight Showdown for them to wear simply by scanning the associated amiibo in the title screen.

Madam Meeber appears in each character's hub zone in the following locations:

In the Nintendo console versions of Shovel of Hope, Madam Meeber will appear at the Village and offer summoning any of the four fairies if the player has Amiibos.

In the Nintendo console versions of Plague of Shadows, Madam Meeber will appear at the Potionarium and offer summoning any of the four fairies or give the Boomtech Set if the player has Amiibos.

In the Nintendo console versions of Specter of Torment, Madam Meeber will appear at the Tower of Fate and offer summoning any of the four fairies or give the Lich Lord Set if the player has Amiibos.

In the Nintendo console versions of King of Cards, Madam Meeber will appear at the Glidewing and offer summoning any of the four fairies or give the Ultimate Supreme Set if the player has Amiibos. Additionally, in all versions of King of Cards, even if not on a Nintendo console, Madam Meeber appears in the Void Crater area. If the player talks to the Adventurer named Horzio in front of where Mr. Hat’s store once was before fighting him, he will grab King Knight and jump into the crater. If King Knight uses the Decree of Rejuvenation before talking to this character, the miniature Troupple will suddenly notice what’s going on and regenerate health for King Knight while his health is going down in the crater, with King Knight living on a single heart.

King Knight then shows up in the Fairy Glade, a green field with large sunflowers, some having smaller versions of familiar structures on them, such as the Potionarium from Plague of Shadows, and the Tower of Fate. Madam Meeber, standing in front of King Knight, asks him to select a fairy.

King Knight can then run around in the field to collect a fairy by using his normal attack button. Almost every character with a dialogue portrait has a Fairy version of themselves, including the Fairies of Shovelry, Alchemy, Torment, and Resplendence (which is now called the Fairy of Royalty). Upon returning to Meeber with a fairy in tow, she will ask King Knight if this is the fairy he wants, unless it is the Fairy of Royalty in which case she will prevent him from selecting it and ask him to find another fairy. If he says yes, she then begins a ceremony in which she crowns the selected fairy as “The Fairy King”. King Knight frantically protests, complaining that he wants to be the Fairy King instead, and starts crying as Meeber continues to chant and praise the fairy.

The scene is then revealed to be all a dream, in King Knight’s room. After this scene, all Propeller Rats lose their propellers and instead gain orange fairy wings. Amongst this, if the player hasn’t gone into King Knight’s room yet, the Feat Get Out of My Room! is unlocked, giving the player access to the Mom and King Knight Joustus cards. The player can go back to the Fairy Glade and choose the same Fairy or a different one. The last Fairy chosen is shown in the credits as "Favorite Fairy!"

"Madam Meeber: Oh, hello, my flightless friend! If you have an amiibo, I can transform it... into a fairy companion! Would you like me to summon some
fairy fun
for you?"
"Madam Meeber:
Boopity boo!
What shall we do?"

"Madam Meeber: Alright, here we go. It's time to show me your finest Amiibo... Hold it steady please."

Scanning the Shovel Knight Amiibo to obtain the Fairy of Shovelry:

"Madam Meeber: Oh! It's the Fairy of Shovelry, that greedy little scamp!
Boopity boo!
Have fun, you two!"

Scanning the Plague Knight Amiibo to obtain the Fairy of Alchemy:

"Madam Meeber: Oh! It's the Fairy of Alchemy, how curious!
Boopity boo!
Have fun, you two!"

Scanning the Specter Knight Amiibo to obtain the Fairy of Torment:

"Madam Meeber: Oh! It's the Fairy of Torment, isn't he just so spooky?
Boopity boo!
Have fun, you two!"

Scanning the King Knight Amiibo to obtain the Fairy of Royalty:

"Madam Meeber: Oh! It's the Fairy of Royalty, how gloriously gilded!
Boopity boo!
Have fun, you two!"

When getting in the Fairy Glade:

When talking to her while holding a fairy: 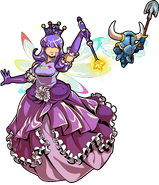 Original artwork of Madam Meeber with the Fairy of Shovelry only.

Madam Meeber and Shovel Knight in-game.
Add a photo to this gallery
Retrieved from "https://shovelknight.fandom.com/wiki/Madam_Meeber?oldid=36755"
Community content is available under CC-BY-SA unless otherwise noted.