Start a Wiki
Maidens are minor characters in Shovel Knight: Treasure Trove. They walk around the Village and Armor Outpost.

Maidens appear as bipedal female horses wearing a dress and a matched necklace.

In Shovel of Hope, Maidens can be found wandering in the Village and Armor Outpost.

A Maiden appears in the ending with the rest of the Village, watching the end of the Tower of Fate. The same Maiden can also be seen wooed by Propeller Knight aboard the Flying Machine.

In Plague of Shadows, Maidens can be found at the Village but are scared off by Plague Knight. One of them flees aboard the Aerial Anvil after Plague Knight's invasion of the Armor outpost.

In the ending again, a Maiden is among the Village's crowd watching the Tower of Fate crumbling down.

A purple dress, brown hair Maiden walking in the Village:

"Maiden: You meet that old witch down in the Juice Bar? I think she tells fortunes, but she won't talk to me!"

A red dress, brown hair Maiden walking in the Village:

"Maiden: I like to look nice on my day off!"

"Maiden: Say, you ever think a horse maiden like me and a guy like you could... No, never mind."

"Maiden: I'm a quarter donkey on my mother's side!"

"Maiden: I'm bringing some oats home to my family! I bet they're hungry." 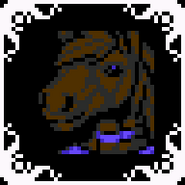 The unused model of the Peasant Lady.

The Peasant Lady in the development tool.

The Peasant Lady in the development tool.
Add a photo to this gallery

Retrieved from "https://shovelknight.fandom.com/wiki/Maiden?oldid=32930"
Community content is available under CC-BY-SA unless otherwise noted.